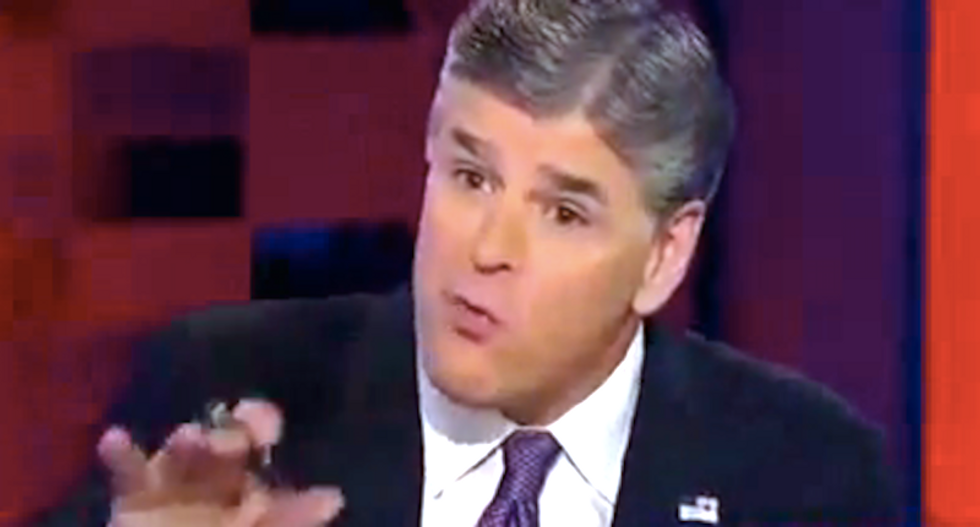 "The guy lectures me because I raise questions about, you know -- Hillary's falling down, she had health issues that were pretty significant, won't release her health records, won't release her speeches to Wall Street," Hannity complained.

But Hannity did not mention that it was Associated Press reporter Lisa Lerer who debunked the argument by conservative media that Clinton "suffered a seizure" during an encounter with Lerer in June.

"Seemingly as 'proof' that something was amiss with Clinton, Hannity exclaimed: 'Watch the reporter, like, pull back as she — the reporter got scared. And she keeps doing it. What is that?' Lerer wrote. "Fox News never contacted me to ask that question. For the record, I wasn't scared for a moment."

Instead, Hannity focused on Stelter, calling him a "little pipsqueak [and] so-called media critic."

"You've got Brian the stenographer Stelter, doing the bidding of Jeff Zucker," he ranted. "They literally have a professor from the Kennedy School of Journalism, who calls your dad a demagogue and says 'Well, demagogues, if they're elected, that usually leads to dictatorship," and the guy never questioned him.'"

Hannity and the younger Trump also indulged in another debunked argument concerning Mitt Romney's performance in the 2012 election.

"How dare I point out that it's a little odd to me that 59 districts in Pennsylvania in 2012, not one vote for Romney," Hannity said. "59 districts, I'm sorry, but that seems odd to me."

"Well, it's different. If you're a Democrat, you're allowed to have the dead voting for you," said Trump. "But if you're a Republican, that would never happen."

Except it did, in Philadelphia. As Billy Penn reported, City Commissioner Al Schmidt -- a Republican -- debunked the idea that there was malfeasance involved in the result, noting that it would be impossible to subtract votes from voting machines in the city, which has several districts that heavily lean toward Democrats.

Schmidt said voter fraud on the scale Hannity has proposed would require "hundreds of people engaging in a conspiracy, and no one finding out about it."

The claim has subsequently been rated "Pants on Fire" by Politifact.

Listen to Hannity's commentary, as posted by Media Matters, below.