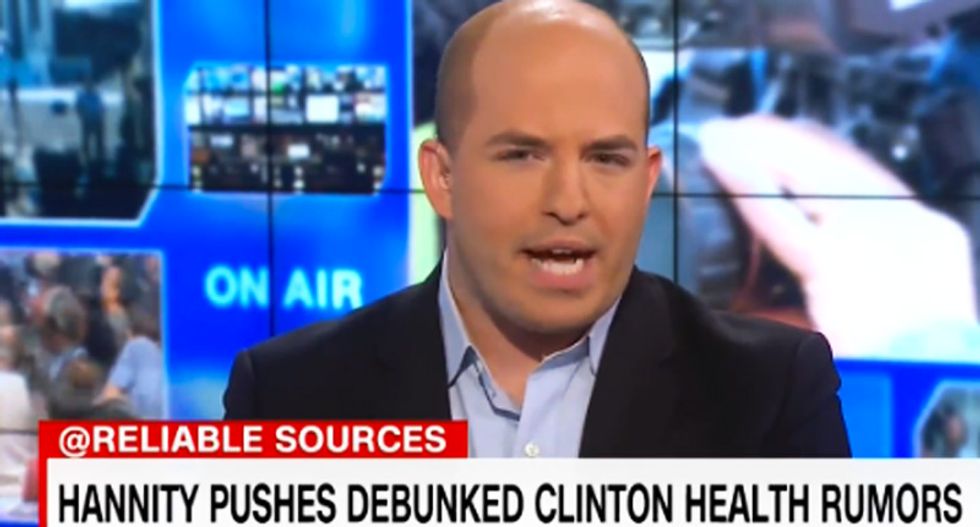 CNN host Brian Stelter took time out from his Sunday interviews to once again go after Fox's Sean Hannity for his irresponsible rumor-mongering, and the media critic pulled no punches saying, "Last time I checked, Fox still has the word ‘news’ in its name."

Last Sunday, Stelter tore into the Fox News host for carrying water for GOP presidential nominee Donald Trump, pointing out that Hannity has shown that he is no journalist.

Noting that Hannity has built his case on out of context short film clips collected over the years, Stelter hammered the pundit for what he called "reckless speculation."

"This whole 'Clinton is secretly sick' thing has been promoted by conservative news sites for years," Stelter remarked. "There is a grain of truth to the idea about her health because she did have a health scare in 2012. It was well reported at the time. But her doctors now say she is physically fit to be president."

"But Hannity's not interested in the truth about Clinton’s health," he continued. "If he was, he could have interviewed people who were actually there during the episodes."

"Look. Conspiracy theories are so much more interesting than the truth," Stelter explained. "But the last time I checked, Fox still has the word ‘news’ in its name."

Watch the video below uploaded by Real Clear Politics: