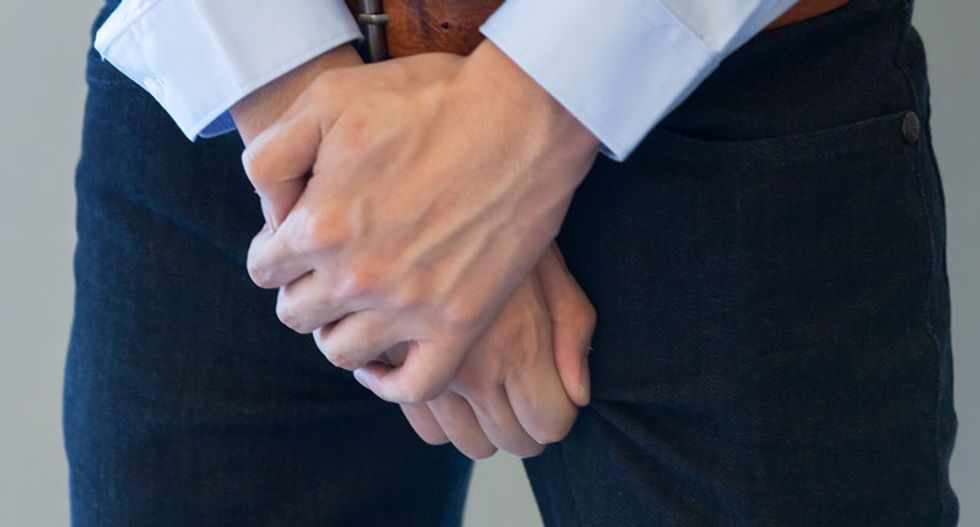 Man holds his hands in front of his crotch (Shutterstock)

If there is one organ that elicits mixed reviews from men everywhere, it is the prostate. The prostate is the gland that produces semen, the fluid medium that protects and nourishes sperm cells. On the one hand (no pun intended), the prostate can be an integral part of any intensely pleasurable orgasm. On the other hand, other than skin cancer, no other cancer is as prevalent in men than prostate cancer, which afflicts 1 in 7 men in their lifetimes. If you are African American, your chances are even greater that you will get it (and 2.5 times more likely you will die from it). Overall, more than 180,000 men will develop this cancer in 2016, and of those, over 25,000 will die from it. The bad news for men about prostate cancer is that the older you get, the more likely it is that you will develop it. The good news is that your chances of survival are actually pretty decent.

Even for those men who don’t get prostate cancer, many will find themselves dealing with BPH, or benign prostatic hyperplasia, also known as an enlarged prostate. Although the causes of an enlarged prostate are not totally understood, one of the suspects is testosterone. As the hormone breaks down in the body, a byproduct, dihydrotestosterone, is produced that may contribute to the growth of the prostate. By the time they reach 55 years old, half of the male population will have BPH. By 65, that number is 75 percent, and by age 80, 90 percent. If you are a man, you will almost certainly develop some symptoms of BPH as you age. Those symptoms will include difficulty urinating, some dribbling afterward, inability to completely empty the bladder, frequent nighttime urination, as well as the possibility of some blood in the urine or recurrent UTIs (urinary tract infections).

The reason an enlarged prostate is trouble is almost entirely due to its location. The organ is located under the bladder and is wrapped around the urethra. As it gets larger, it compresses the urethra, contracting the muscles, and partially blocks the exit, so to speak. Sufferers find their lives revolving around bathroom visits, interrupted sleep and the fear of something worse, prostate cancer. The result is a cottage industry that has evolved, in both the mainstream medical arena as well as the alternative medical community, aiming to alleviate the symptoms and the fears of prostate illness, not to mention cashing in. In both medical fields, legitimate and illegitimate treatments have flourished.

Here are seven facts about the treatment of prostate illness.

1. BPH can lead to serious complications.

An enlarged prostate is not always just an annoying inconvenience. While it is true that many men suffer relatively mild symptoms that warrant only careful monitoring, others have significant issues with urinating. Significant blockage of the urethra can lead to increased urinary tract infections, stones in the bladder, blood in the urine, and worse, actual kidney damage. To reduce the effects of BPH, some tips include double-voiding (urinate, relax your muscles, urinate again), take your time while urinating, try sitting instead of standing, spread out your daily fluid consumption (and reduce it at night), avoid caffeinated beverages, and be mindful of medicines that irritate the prostate, like cold and allergy medicines. If BPH symptoms are severe enough, a urologist may recommend medications that can relax the prostatic muscles or shrink the gland itself. Alternatively they may want to perform transurethral microwave therapy or a transurethral needle ablation, both minimally invasive procedures that remove portions of the prostate in order to relax the gland’s grip on the urethra.

One of the most popular alternative treatments for BPH is the saw palmetto, used since the beginning of the 20th century as a remedy for urinary and prostatic problems. Derived from a palm-like plant, its berries were a food and medicine source for Native Americans. The health supplement industry has long pushed saw palmetto as a safe and effective natural treatment for prostate problems. While results of some studies have been mixed, the most extensive ones have indicated that saw palmetto, even at high doses, is no more effective than a placebo. There have been studies done on other “natural” treatments for BPH, including stinging nettle and pygeum bark. These have shown some improvement in BPH symptoms, but the studies have been too small-scale to draw conclusive results. If you decide to try any herbal supplement, make sure it is from a reputable brand. While there are few side effects from these remedies, many brands have been found to have less of the ingredient than claimed on the packaging.

3. Prostate cancer is over-diagnosed and over-treated.

In the 1980s, a test was developed to detect prostate cancer. Widely available, the prostate-specific antigen test, or PSA, detects the level of a protein in the blood that is produced by the prostate. If the level of protein detected is above what is considered normal, a biopsy is performed to determine whether cancer is present. The test was hailed as a method to detect prostate cancer early, potentially saving countless lives. There are a few problems, however, chief among them that the rate of cancer deaths did not go down in the U.S. Additionally, the PSA is not entirely reliable, giving false positives (only about 25 percent of men with an elevated PSA actually have cancer) that resulted in needless invasive biopsies, or false negatives that give a misguided sense of assurance. The biopsies themselves often cause discomfort and occasionally can lead to serious infections. And even though patients who do have prostate cancer statistically probably will not develop the aggressive form of the disease, there is no way to know that from the PSA test. The result has been an avalanche of over-diagnosis resulting in worried patients and better-safe-than-sorry doctors removing the gland unnecessarily, with the accompanying side effects.

In 2012, the U.S. Preventative Services Task Force, an independent panel of experts that evaluate preventative services and make recommendations based on the latest scientific knowledge, strongly recommended against the PSA test. “Many men are harmed as a result of prostate cancer screening and few, if any, benefit.”

4. Surgery for prostate cancer may not be necessary.

The standard medical treatments for prostate cancer are a procedure called radical prostatectomy, the surgical removal of the prostate gland, and external or internal targeted radiation of the prostate. While both the removal of the prostate and the irradiation of the gland can generally be effective in treating the cancer, there can be disturbing consequences. Both can leave the patient impotent (which occurs in up to half of patients) or incontinent (10 percent of patients). While improvements in the procedures have reduced the incidence of side effects, they have not been eliminated.

But here’s the interesting thing. In the majority of prostate cancer cases, the cancer is slow-growing. If left untreated, most “slow-growing” patients are likely to die from something other than prostate cancer. In fact, a respected study indicated that, in these slow-growth cases, doing nothing statistically yielded roughly the same life expectancy as removing the prostate. The obvious implication is that regular monitoring of the cancer, or “watchful waiting,” is as effective as invasive surgery or radiation. (Watchful waiting is not an option for the 10-15 percent of patients who have an aggressive cancer; in those cases, active treatments are necessary.) The number of patients opting for watchful waiting has skyrocketed in recent years, from 7 percent of patients in the 1990s and early 2000s, to 40 percent since 2010, and among men 75 years and older, that number is over 75 percent. "One of the arguments against screening is that we are over-detecting and over-treating prostate cancer, and because we are over-treating men who don't need treatment, we are doing more harm than good. By reducing the rates of overtreatment, we are likely increasing the benefit of screening," David Penson, of the Vanderbilt University Medical Center in Nashville, Tennessee told the Prostate Cancer Foundation.

5. Some doctors don’t think it should even be called cancer.

Because the word cancer can cause such panic in patients (a study in Sweden found that the suicide rate among patients given the cancer diagnosis was six times higher than the rest of the population), some doctors believe slow-growing prostate cancer should not be labeled as such. For them, the preferred label is prostatic epithelial neoplasia (or PEN). Prostate cancer, they believe, should be confined only to prostate lesions or tumors that are likely to lead to the aggressive form of the disease.

6. There are ways that may help minimize the chance of getting prostate cancer.

Studies have been mixed, but there have been some indications that frequent ejaculations help minimize the risk of getting prostate cancer. But whatever. It can’t hurt, and it’s fun. Get to it.