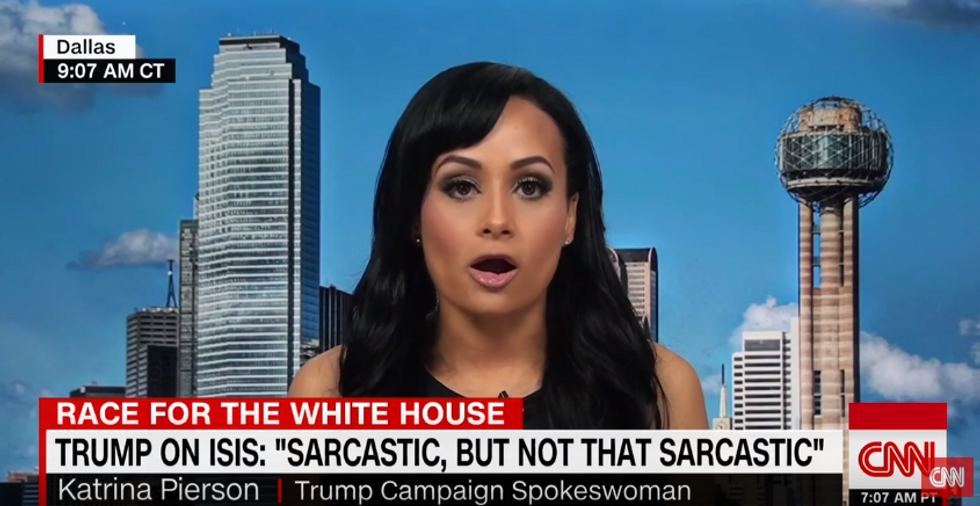 Trump campaign spokeswoman Katrina Pierson has earned a reputation for serving up nonsensical word-salad defenses of her boss, and with good reason.

This past weekend, for example, Pierson's defense of Trump not releasing his tax returns was so completely illogical that even Fox News host Arthel Neville had to visibly restrain herself from cracking up.

With this in mind, we figured it would be a good time to take a stroll down memory lane and revisit some of Katrina's greatest hits. Without further ado, here are seven times Katrina Pierson mutilated logic and made fact checkers' brains melt.

1.) Pierson says that America wasn't even in Afghanistan until Obama's presidency.

Pierson drew hackles from the entire internet last week when she declared that, "We weren't even in Afghanistan by this time, Barack Obama went into Afghanistan, creating another problem."

In reality, the United States first went to war in Afghanistan all the way back in 2001, when Obama was still a state senator in Illinois.

2.) Pierson defends Trump's decision to not release his taxes and even Fox News can't take it.

This past weekend, Pierson came up with an interesting defense for Trump's decision to not release his taxes.

Pierson responded by calling this a "novelty tradition."

3.) Pierson says it's the media's fault that people think Donald Trump is racist

In the wake of Trump's attacks on "Mexcian" judge Gonzalo Curiel, MSNBC's Joy Ann Reid pointed out to Pierson that Trump is the one who decided to bring up Curiel's ethnicity as a factor in explaining why he was unfit to oversee the Trump University case.

Pierson responded by saying that Trump isn't racist -- it's just that people think he's racist because the media report on the things he says.

"The media has the problem with Donald Trump and race," Pierson said. "Donald Trump is talking specifics -- he has policies like the temporary ban on Muslim immigration for national security purposes, and like stopping illegal immigration and building a border wall... It's the media that has turned it into a race thing by the way they've reported it."

When you defend your boss against charges of racism by citing an explicitly bigoted policy such as a blanket ban on Muslims entering the country, you may need to try harder to come up with better examples of his loving tolerance.

During a CNN interview, Wolf Blitzer also pointed out to Pierson that Trump was the person who brought up Curiel's "Mexican" heritage without even being prompted to do so. This time, Pierson defended her boss by saying he was just following the example of Black Lives Matter.

"The question [to Trump] is, 'Why do you think the judge is being unfair?'" Pierson began. "And I think it is fair to say, considering that we do have a culture in this country that puts up people like Black Lives Matter, who insist that ethnicity is important in the judicial system, and we have the media that is constantly saying that 80% of Hispanics don't like Mr. Trump, and all of a sudden decisions in this case have been changed, actually hurting Mr. Trump."

Call us crazy, but we can't recall any time that Black Lives Matter has ever called for white judges to be barred from overseeing cases with black defendants.

During an interview with CNN's Kate Snow, Pierson tried to claim that Trump never really proposed a "temporary" ban on all Muslims entering the country.

Then Snow rolled the clip of Trump's Muslim ban announcement.

"Donald J. Trump is calling on a total and complete shutdown of Muslims entering the United States until our country's representatives can figure out what the hell is going on," he said.

Pierson replied that the media was taking this statement out of context.

After the Democratic National Convention, Donald Trump decided to pick a fight with Khizr and Ghazala Khan, a Muslim American couple whose son Capt. Humayun Khan died serving his country in Iraq in 2004.

Given that attacking Gold Star parents is generally seen as an unwise political tactic, Trump surrogates had to be more imaginative when coming up with ways to defend their boss.

Pierson got very creative indeed and tried to blame President Obama for purportedly changing the rules of engagement and making it harder for soldiers like Khan to defend themselves.

There is a very obvious problem with this, of course: Khan was killed by a car bomb all the way back in 2004. During that time, Clinton was a senator for New York and Obama was a state senator in Illinois.

After Trump said that "Second Amendment people" could stop Hillary Clinton from appointing judges after she became president, Pierson tried to tell MSNBC's that Trump was merely saying that he wanted pro-gun rights groups like the NRA to rally behind him this fall to beat the Democrats.

Snow pointed out that Trump was clearly talking about things that the NRA could do after Clinton was elected. Pierson then says he really meant that Trump suggested the NRA could lobby senators into opposing any anti-gun judge that Clinton might nominate.

Given that even Pierson seemed to have trouble interpreting Trump's words, Snow wondered whether the candidate would be better served by issuing a formal clarification of his comments.

“You have no concern about his ability as president — if he were president — to make an argument with foreign leaders, in negotiations and not be misconstrued or misunderstood?” Snow asked Pierson.

After a pause, Snow said she was left "speechless" by Pierson's response and confessed that "I’m trying to follow your logic here, Katrina, and I’m having a hard time."