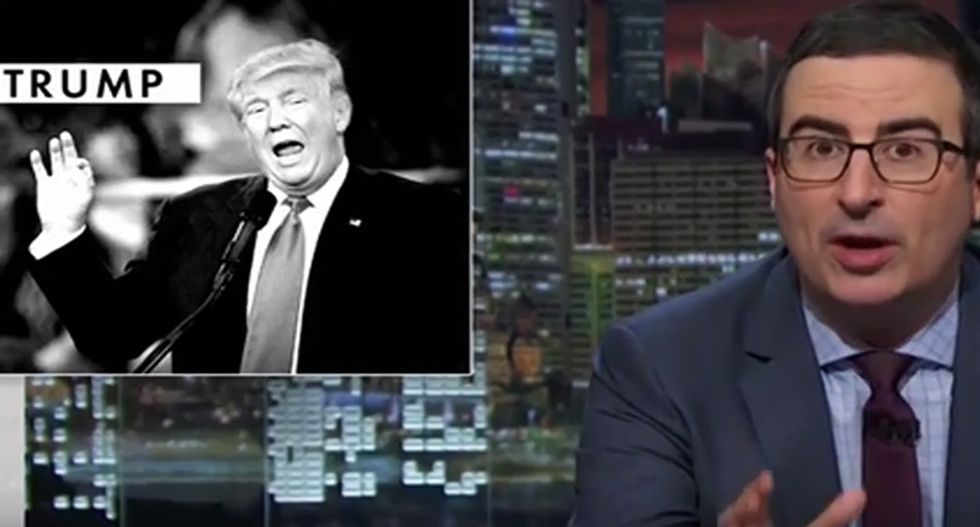 Kicking off HBO's Last Week Tonight, host John Oliver took a hard look at Donald Trump's past week that started off so well, only to collapse when he couldn't stay on script after a one hour speech on his economic policy.

Noting that Hillary Clinton had a rough start with questions about the Clinton Foundation emails, Oliver pointed out, "She was eclipsed by the imploding star that is Donald Trump, the owner of what you might describe as a ‘resting rich face.’”

“This was the 53rd consecutive week he was going to put his campaign back on track," Oliver observed before pointing out that it didn't happen again after Trump's assertion that President Barack Obama was the "founder" of ISIS.

"Wow,” said Oliver. “Now clearly what he just said is absolutely absurd, but even when people try to help him reframe it, he doubled down.”

With that, Oliver played a clip of radio host Hugh Hewitt trying to coax Trump into walking back his claim tried to get him to admit that he was making a joke or exaggerating -- to no avail.

“No, I meant he’s the founder of ISIS,” blurted Trump to a frustrated Hewitt. “I don’t care, he was the founder.”

“He’s so insistent!" a smirking Oliver said "He’s like the guy drowning but waving off a lifeboat saying, ‘Get out of here, I’m very buoyant. I’m the most buoyant. Everybody talks about my buoyancy. I’m a tremendous floater.’”

Oliver then slammed Trump for calling his ISIS comment "sarcasm," saying: "And yes, ‘sarcasm’ is a bullshit excuse. It’s the douchebag’s apology.”

Oliver then tore into Trump for his dangerous rhetoric when he implied that Hillary Clinton could only beat him if she "rigged" the election.

“What is really worth taking note of there, and is worth thinking about, is that he’s suggesting the election may be stolen by his opponent, and that’s actually dangerous,” explained Oliver. “He is priming his supporters to question the result when he loses Pennsylvania, as polls indicate he will and as all Republican presidential candidates have since 1988."

Oliver pointed out that the Trump campaign site even has a page to sign up as a "Trump Election Day" observer.

He wryly added, “In a way, we are all Trump Election Day observers. Because if you look out of your window in November and see the Four Horsemen of the Apocalypse you’ll know, oh shit, they just called Florida!”