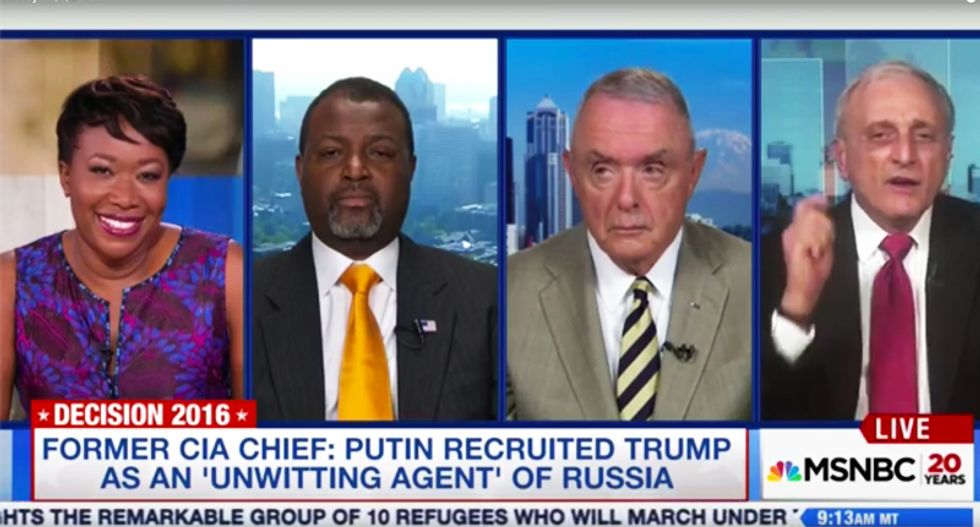 One of GOP presidential candidate Donald Trump's most avid defenders went on a rambling rant Saturday morning as he tried to convince MSNBC host Joy Reid that the New York businessman knows better how to deal with Russian strongman Vladimir Putin than the Pentagon generals and the entire U.S. intelligence network combined.

Reid wasn't having it.

After showing a clip of former CIA Director Michael Hayden calling Trump “erratic” and suggesting that the GOP’s presidential candidate might be an “unwitting agent” of Russia, Reid turned to one-time New York gubernatorial candidate Carl Paladino for comment, saying, "You are pretty much fighting an armada of intelligence experts."

"In your mind," Paladino immediately retorted, with Reid shooting back, "No, not in my mind. Actually in my ears because we're listening to them speak."

"I think what's happened to you is that you've been in a conditioned box, for a long time, of political correctness," Paladino continued as Reid laughed.

"Political correctness" he continued. "And a certain way of doing things. And when a guy comes on the scene who shows real leadership qualities, who can talk to the America people, and they can find faith in him and confidence in him that he's gonna do the right thing -- when that man comes on the scene, you guys just don't know what to do."

"Yeah," Reid responded with a tilted head and a smile.

"The progressives are gonna lose their influence and their power and their control of the American people's minds, and you're in a panic state right now ---, " at which point a smirking Reid cut him off with a sarcastic "Oh yeah, were panicking."

As Reid tried to cut him off again from rambling, Paladino asserted, "You're way out there making crazy accusations," causing Reid to shoot him down.

"I think if you look at the polling, most of the public is standing by the generals and intelligence professionals, at least as we stand now." she said.

"I know which side you're on, mam," Paladino blurted, causing Reid to pause and raise an eyebrow at him.

"Not on Vladimir Putin's side, and I like that stance," she told the Trump advocate.