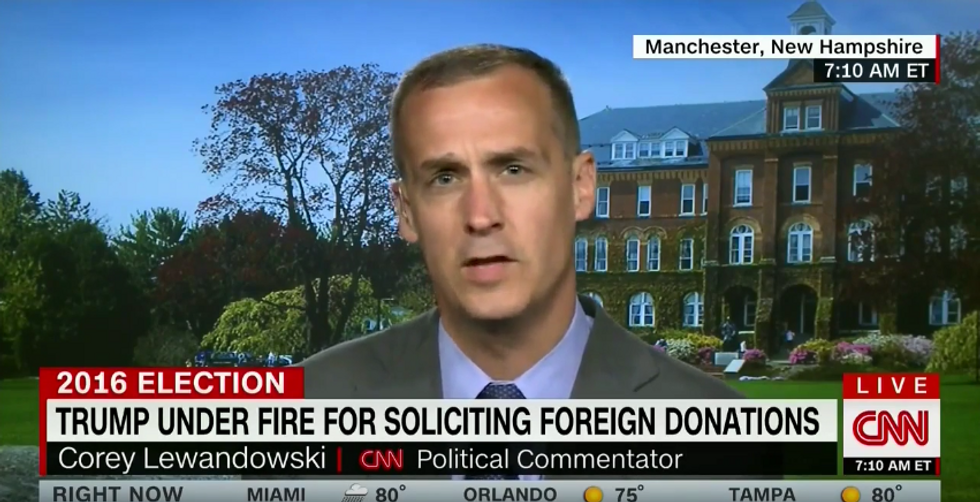 New filings with the Federal Elections Commission (FEC) reveal that Corey Lewandowski is still being paid by Republican presidential nominee Donald Trump, even after being signed on to CNN as a commentator.

According to the Washington Post, the ousted campaign manager made $20,000 in the month of July, which was paid to his consulting company Green Monster.

The payment was made July 6, two weeks after Lewandowski was fired as campaign manager. The campaign's official line on the topic was that Lewandowski was only receiving severance pay, but the monthly $20,000 payment is the same as he was being paid before he got fired.

Lewandowski has reportedly continued to advise the campaign on an informal basis, which rankled Paul Manafort, who was hired to replace him. Manafort stepped down on Friday as evidence surfaced that he allegedly engaged in illegal lobbying while working for pro-Russian Ukrainian president Victor Yanukovych.

Democratic nominee Hillary Clinton's campaign has far outspent the Trump campaign so far, allocating $49 million in July on television ad buys and to deploy a national network of staffers. Trump spent $18 million in July and continues to lag behind Clinton in fundraising and in building a national infrastructure.

Since the beginning of the election cycle, Trump's campaign has spent $89.5 million, which is dwarfed by Clinton's $319 million. July was Trump's best month so far for fundraising, pulling in $82 million. The Clinton campaign's donations for the same period totaled around $90 million.