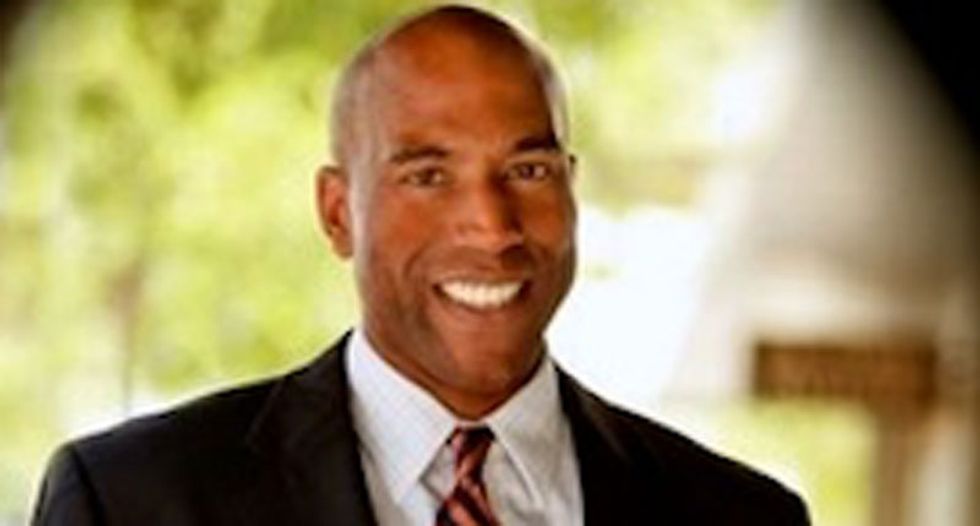 Just who is this African American who backs Donald Trump?  The media have identified him as a historian in their accounts, though he lacks a degree in history.  He received his undergraduate degree in Political Science in 1991 from the University of Maryland College Park. In 2007 he earned his Masters in Business Administration from Webster University in St. Louis, Missouri.

But he has co-authored a history book, Belonging: The Civil War's South We Never Knew.  The book makes the astonishing claim that blacks in large numbers fought for the South during the Civil War, a myth advanced by white racist groups that long ago was debunked by historians. Hankerson is the descendant of slaves.  His coauthor, Judith Shearer, is the scion of a family that owned slaves.

So who is Derek Boyd Hankerson?

Raised in Prince Georges County, Maryland, Hankerson developed a strong passion for history at the early age of ten years old. When he was young, he frequently took trips to the South with his family, where he visited historical sites and learned history about his West African Gullah Geechee ancestry and the Underground Railroad.

One trip to Saint Augustine forever changed his outlook on history, making him question the accuracy of conventional learning he received from textbooks. He had been taught that St. Augustine was founded in 1513, but a historical sign he saw on his visit listed the city’s founding year as 1565. In the history books he had read neither St. Augustine nor Florida had been mentioned in connection with the founding of European settlements. He was taught the first settlements were in Jamestown and Plymouth.

He began to wonder – “What else are people hiding?”

In his twenties he was a political operative in the Reagan administration. His political resume includes working in the White House under both President George Herbert Walker Bush and George W. Bush.  In one stint he served in the White House Office of Public Liaison for the U.S. Department of Housing and Urban Development (HUD).  He also worked on campaigns for governors and senators.

Which brings us back to Donald Trump.  For all the officials he’s worked for, Hankerson says no one has had quite the same appeal for him as Trump. What drew him to Trump is the candidate’s background as a businessman and his stance as an outsider. A Washington insider himself, Hankerson said he is tired of self-seeking politicians. Ideologically, he strongly identifies with Trump’s opposition to the Trans-Pacific Partnership (TPP), Common Core and the outsourcing of jobs.

Hankerson is currently in Wisconsin working on the campaign of a businessman who’s challenging House Speaker Paul Ryan in the GOP primary. In the political off-season Hankerson devotes himself to teaching, filmmaking, and writing.

His book, Belonging: The Civil War's South We Never Knew, is on sale on Amazon, but has received no reviews.  There are also no blurbs.  In an interview with HNN over email he insisted that blacks fought for the South:

"I've personally had 30 members of my family who are native to the south and fought to protect their homes and farms. I also have family members who fought for the north to include the family's 54th Mass. These relatives in the south were part of Calvary units, sharp shooters, officers (mulatto), infantry and reserves. It's a misnomer or incorrect history in believing blacks didn't fight for the south when the majority or 80 percent of black people are originally from the south and most arrived pre-1800 or pre-mass immigration. To classify them as coward is false."

Those who believe blacks fought in the Confederacy (at least voluntarily) are in a small minority. Eric Foner, DeWitt Clinton Professor of History at Columbia University and an expert in African American history, dismisses claims like Hankerson’s, which rest on the belief that slavery wasn’t the cause of the Civil War:

“Slavery, as Southern Vice President Alexander Stephens put it, was ‘the cornerstone’ of the Confederacy. This does not mean that it was the only issue contributing to the coming of the Civil War. Nor does it suggest that the hundreds of thousands of men who fought under the Confederate banner, most of them non-slaveholders, were motivated exclusively by the desire to keep blacks in bondage. Yet to claim that Confederate soldiers went to war to protect their ‘way of life’ conveniently forgets that this way of life was founded on slavery.”

“Slaves fully understood this,” says Foner. “A few light-skinned blacks may have passed for white and joined the Southern Army. But the regiments of black Confederate troops one hears about of late exist only in myth or in the willful confusion of the Army's black servants and laborers--slaves impressed into service by their masters--with combat soldiers. The reality is that hundreds of thousands of slaves eagerly sought their freedom by fleeing to Union lines and enlisting in the Union Army.”

Scholars have conceded that up to 50,000 slaves labored for the Confederacy and that some blacks actually fought for the Confederacy.  Harvard’s John Stauffer says the number of black soldiers was somewhere between 3,000 and 10,000. But he points out that that would have been less than 1 percent of the black men living in the South of military age.  Even this modest admission, he says, has gotten him into hot water with other scholars.

In its final hour the Confederacy considered arming slaves in exchange for their freedom.  The measure was defeated (though the government did allow blacks to be recruited).  As one politician remarked, “What did we go to war for, if not to protect our property?”

But that’s not Hankerson’s view: “No, slavery was not the key issue. Slavery was started in Egypt by Africans enslaving Jews, but Muslims, Portuguese, Spanish and Europeans got in on the act.” In North America “indentured servitude existed” until it could not keep up with export demands “and Africans were imported because they knew agriculture and how to grow rich cotton and other crops.” The key “Civil War issues are ones we are still fighting today… and include trade, tariffs, states’ rights, and religion.”

This story, by Danielle Dougall, first appeared at the History News Network.