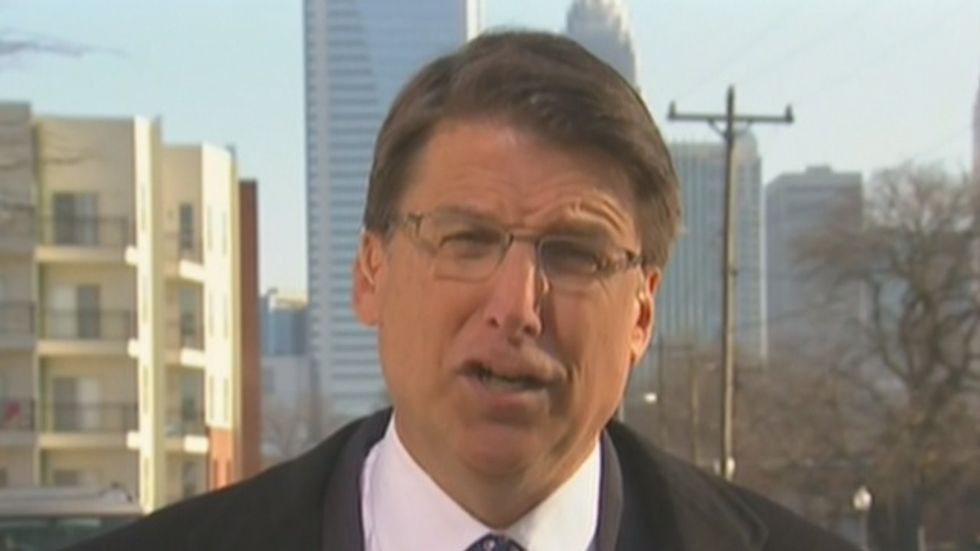 North Carolina Gov. Pat McCrory (R) has released a fear-mongering campaign ad that paints transgender people as dangerous predators who are out to rape children.

The ad begins with a woman named Gina Little of Greensboro, NC saying, "At 9, I was molested by a teenager."

She continues, "When I heard that Pres. Obama and and Roy Cooper want to force schoolchildren to share the same locker room, shower and restroom with someone who claims to be the opposite sex, I was horrified."

"Gov. McCrory knows this is not about discrimination, money or politics," Little claims. "He's standing up under intense pressure and doing what's right. Our governor is on our side."

The implication is clear. Little is saying that if trans men, women and children are allowed to use the facilities corresponding with their expressed gender, they will rape and molest children.

The truth, however, is that the overwhelming majority of sex crimes against children are committed by men who identify as heterosexual and the bulk of these crimes happen in the home.

In April, a coalition of 200 groups that work with survivors of sexual assault, child abuse and domestic abuse released a statement debunking right-wing fear-mongering around the idea that transgender bathroom rights contribute to the sexual assault of minors.

“Over 200 municipalities and 18 states have nondiscrimination laws protecting transgender people’s access to facilities consistent with the gender they live every day,” said the statement. "None of those jurisdictions have seen a rise in sexual violence or other public safety issues due to nondiscrimination laws. Assaulting another person in a restroom or changing room remains against the law in every single state.”

McCrory -- who has doggedly insisted that his party's law isn't discriminatory -- has seen his poll numbers skid southward in recent months. The North Carolina Republican Party is bracing for what it believes could be a "tsunami" of Democratic voters in November that will purge them from office.