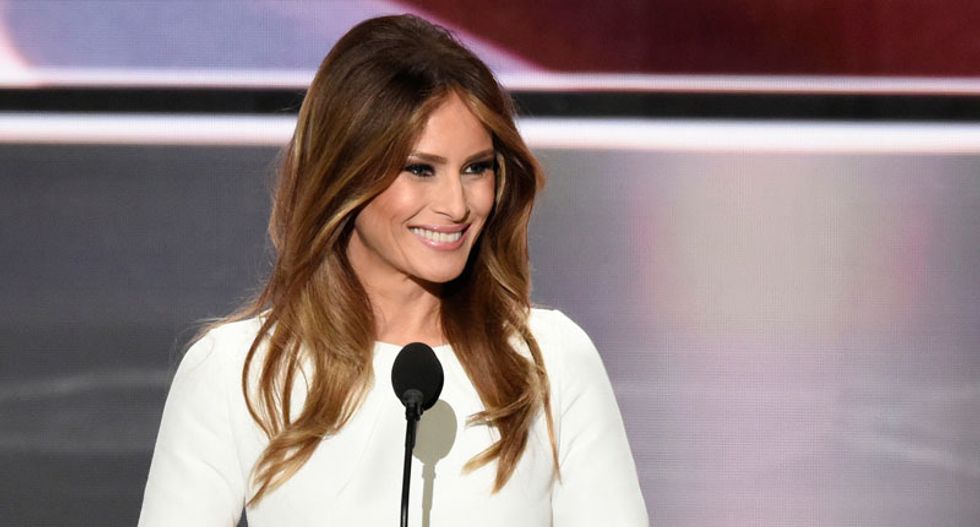 After spending his entire campaign attacking immigrants and their families and promising to ban Muslims from entering the country, Republican Party nominee Donald Trump's own wife appears to have some inconsistencies in her immigration story.

"After obtaining a degree in design and architecture at University in Slovenia, Melania was jetting between photo shoots in Paris and Milan, finally settling in New York in 1996," CBS News quote from her website, which has now been deleted.

“It never crossed my mind to stay here without papers. That is just the person you are,” Mrs. Trump told Harper's Bazaar in January. “You follow the rules. You follow the law. Every few months you need to fly back to Europe and stamp your visa. After a few visas, I applied for a green card and got it in 2001.”

It has been widely reported that Mrs. Trump came to the United States on an H1-B visa, which Mr. Trump has had a difficult time deciding if he supports. His current position is that he opposes them, claiming that he will crack down on them.

"I will end forever the use of the H-1B as a cheap labor program, and institute an absolute requirement to hire American workers first for every visa and immigration program. No exceptions," Mr. Trump's own website quotes him telling Megyn Kelly in March.

Holding an H1-B visa is inconsistent with Mrs. Trump's claims that she held a visa at all times because she would return to Slovenian and renew her visa every few months, as they are valid for three years and can be extended for six years.

"If, as she has said, Trump came to New York in 1996 and obtained a green card in 2001, she likely would not have had to return to Europe even once to renew an H-1B," Politico reports from immigration attorneys and experts. Saying she had to return to Slovenia to renew the visa is what would have been required using a B-1 Temporary Business Visitor or B-2 Tourist Visa, neither of which would have allowed Mrs. Trump to be employed as a model in the United States. Doing so would not only constitute fraud but would also violate all immigration policies Donald Trump has advocated for the last year. The one exception is for certain domestic servants who come to the United States with their employers. There is no exception for models.

Committing visa fraud would also question Mrs. Trump's green card application and ultimate citizenship application. It isn't unheard of for those immigrating to the United States to have visa complications, particularly in the modeling industry. Politico cites Sara Ziff, founder of the Model Alliance, which advocates for fair labor practices for models in the fashion industry, who explained that many companies will bring in foreign talent and have them work illegally under tourist or temporary business visas.

The timeline continues to be inconsistent as Mrs. Trump gives interviews where she seemingly changes the story each time. The nude photos were taken in 1995 for the January 1996 version of a now defunct French magazine. Photographer Alé de Basseville confirmed that the photos were shot in a studio in Manhattan and that he met Mrs. Trump through a Paris-based modeling agency with offices in New York.

Italian businessman Paolo Zampolli sponsored Mrs. Trump's entry into the United States, and said that she would have entered on an H1-B visa or an O-1 visa. The O-1 is for those who have “extraordinary abilities" such as sports stars or well-known actors. Mrs. Trump didn't qualify as either at the time.

The Trump campaign told Politico, “Melania followed all applicable laws and is now a proud citizen of the United States.”

The Trump campaign banned Politico in March after reporter Ben Schreckinger was blocked from a press conference Trump gave in Florida. It followed a story Schrekinger wrote about then-campaign manager Corey Lewandowski. Schrekinger was escorted off the Mar-a-Lago club property.