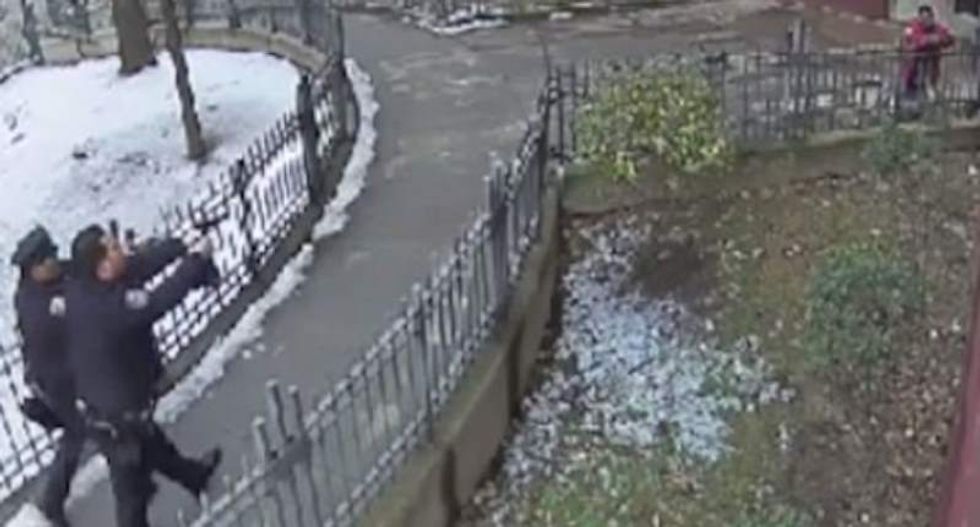 Newly-released video undermines New York City police's claim that a teenager was threatening them with a toy gun when they fired at him 16 times during a December 2013 encounter, the New York Daily News reported.

The footage shows Keston Charles, who was 15 years old at the time, running from officers, then limping, then putting his hands up with no sign of the BB gun he was reportedly carrying, which he allegedly took from a friend during a neighborhood fight and used to threaten another boy.

Charles served 18 months of probation in connection with the incident, and is reportedly trying to obtain his GED.

"I was scared for my life. I was trying to get away," Charles said of the encounter. "I never been shot at before."

Charles was hit three times -- twice while surrendering at the front door of his apartment building in Brooklyn. Charles is now suing Officer Jonathan Rivera over the incident.

An attorney for the city of New York, Elissa Jacobs, said that Charles "did not put his hands up to surrender before any round of shots," a statement apparently contradicted by the footage. According to court documents, officials said since Charles was only hit three times, it demonstrated "how fast he continued to move and that the threat to public safety had not been abated."

Watch the footage, as posted by the Daily News, below.