Rudy Giuliani has a 9/11 truther problem 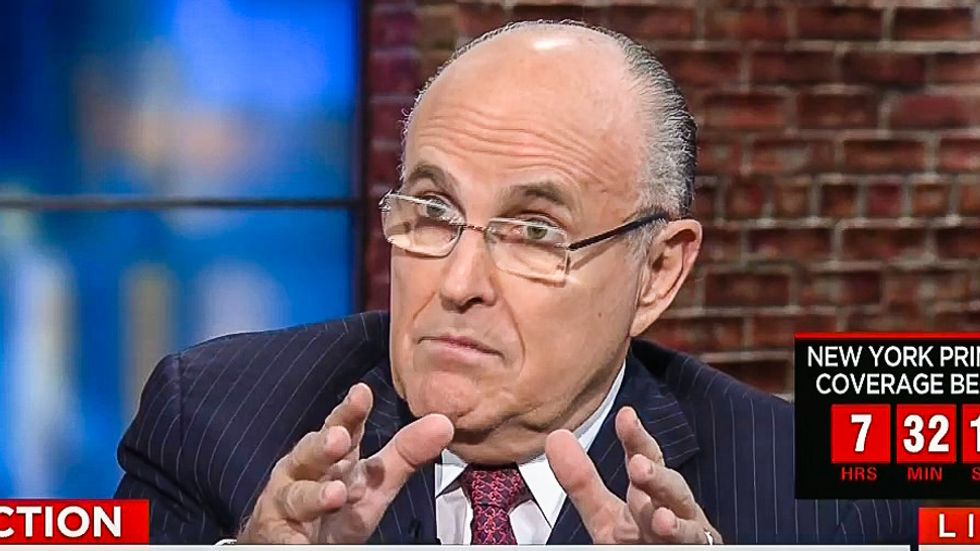 Rudy Giuliani has quietly prostrated himself to people who think he killed 3,000 New Yorkers. He is also asking people to google conspiracy theories.

Rudy Giuliani has ridden the coattails of his default status as "America's Mayor" or "Mayor of 9/11" very far indeed. He has made millions of dollars through Giuliani Partners, in no small part due to "Giuliani" being a brand name associated with the September 11th attacks and the so-called “War on Terror” –even though, time and again, he has proven himself woefully ignorant on the matter.

While Giuliani's "Mayor of 9/11" status has made him millions, it never bought him the presidency -- as he had wanted. Now, he appears to be vying for influence in a potential Donald Trump presidency.

When confronted about Donald Trump's claim last year that "thousands and thousands" of Muslim American's in New Jersey celebrated the 9/11 attacks, Giuliani obfuscated by saying that there were "pockets of celebration," while also conceding that Trump "exaggerated" the numbers.

More recently, Rudy Giuliani looked foolish while defending Trump when he called President Obama "the founder of ISIS" and spoke about "Second Amendment people" – a comment which was widely interpreted as a threat against Hillary Clinton.

Buzzfeed news decided to conduct a little experiment by googling "Hillary Clinton illness" and they came up with two conspiracy websites as top hits. Now a Trump surrogate relying on internet rumors is nothing new, but but Rudy "Mayor of 9/11" Giuliani asking people to google conspiracy theories got me thinking.

During a 2007 presidential primary debate, Joe Biden said of Rudy Giuliani "there’s only three things he mentions in a sentence -- a noun, a verb, and 9/11."

The former mayor has constantly evoked 9/11 while campaigning for Donald Trump, despite seemingly forgetting about the attacks during a speech in Youngstown Ohio in which he stated "under those eight years, before Obama came along, we didn't have any successful radical Islamic terrorist attack in the United States. They all started when Clinton and Obama got into office.”

There is another group of people whose mantra is also "a verb, a noun, and 9/11" -- and Rudy Giuliani would much rather no one point out how close he has gotten to them. Rudy “Mayor of 9/11” Giuliani has tied himself to Donald Trump’s sinking ship which is also packed with 9/11 truthers.

In the past, Giuliani has never failed to feign outrage at liberals in the name of 9/11. But, when the candidate he supports went on the Alex Jones show and praised the host -- conspiracy guru who has built a career selling fake supplements and peddling conspiracies about 9/11 -- Giuliani suddenly wasn't so offended. Donald Trump ostensibly went on Alex Jones' Show out of opportunity because Jones supported Trump's claim that "thousands and thousands" of American's cheered 9/11.

Roger Stone, one of Donald Trump's closest surrogates -- his right-hand man according to some commentators, has appeared on the Alex Jones show more than a dozen times.

A recent piece by The Daily Beast pointed out how likely Trump supporters are to be from the so-called "tinfoil hat brigade" and that the hashtag #falseflag has been used by a disturbing percentage of his followers.

Even Donald Trump's national spokesperson, Katrina Pierson, has tweeted about 9/11, asking if it was in fact an inside job.

Now I don't care what someone believes, part of what makes America awesome is the right to invent stupid bullshit and propagate it without being censored. But can Rudy Giuliani claim any shred of integrity while asking people to google conspiracy theories when he won't stand up to people who claim he helped kill 3,000 New Yorkers?