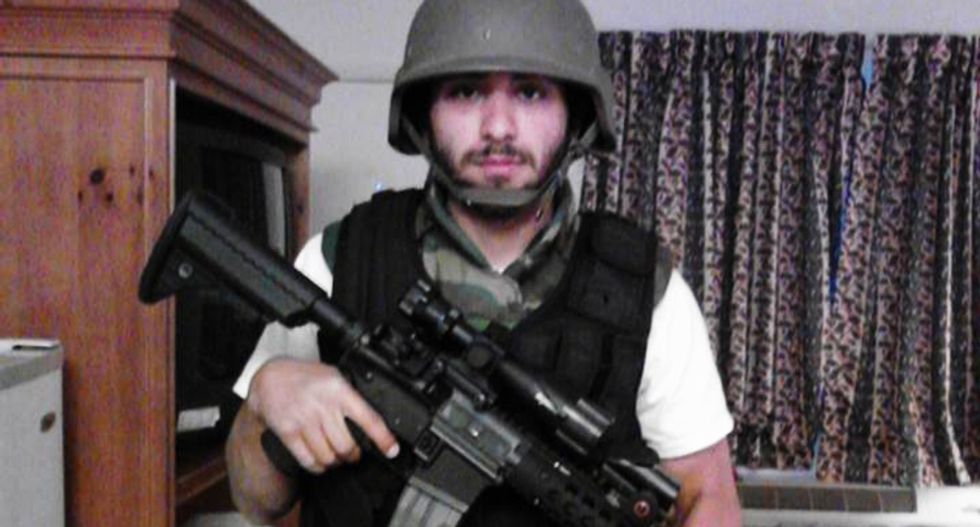 A Las Vegas conspiracy theorist has been taken into custody and charged with making terrorist threats after posting a disturbing YouTube video threatening to slaughter "gays, faggots, lesbians and satanists," reports KTNV.

Bryce Cuellar, 24, was arrested by Las Vegas police after they were notified by Interpol in July about Cuellar's video. In the video, Cuellar stated that he is tired of the government trying to take away his First and Second Amendment rights and planned to go on a killing spree.

Calling himself a "Christian warrior," Cuellar bragged that he would use his weapons as the Founding Fathers intended, killing," gays, faggots, lesbians and satanists."

According to Las Vegas police, Cuellar reportedly beat his wife hours after posting the video on YouTube, where he displayed his weapons while wearing a Kevlar vest and sporting night-vision goggles.

A review of Cuellar's YouTube page reveal a collection of conspiracy-minded videos including ones that question what happened at Sandy Hook Elementary, support for the Bundy family's war on the government, the threat of the Illuminati  and proof that angels and demons are real. Investigators say the timeline of his videos suggest that he has sunk deeper in the world of conspiracy mongering over the past three years.

Following his arrest, Cuellar admitted to making the video but said that he was "angry and drunk" at the time, and has no intention of murdering anyone.

Despite that, Cuellar is being held on $100,000 bail and has been admitted for a psychological evaluation.

The Las Vegas man's next hearing is scheduled for Sept. 1.