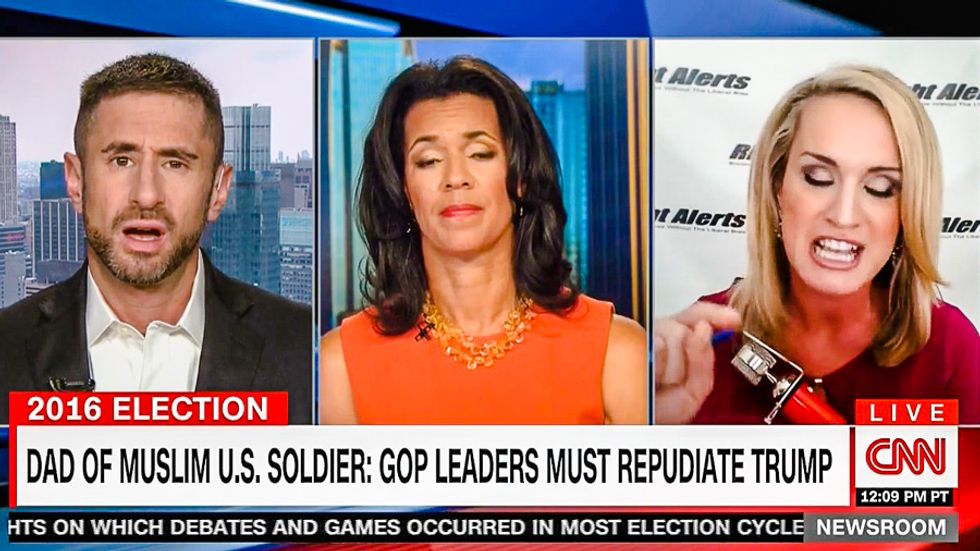 Donald Trump surrogate Scottie Nell Hughes defended the GOP hopeful over the weekend after he came under fire for appearing to equate the death of a soldier in the Iraq war to "sacrifices" he made during his business career.

While speaking to ABC News on Sunday, Trump fired back against criticism from Khizr Khan, the Muslim father of a fallen U.S. soldier who died in Iraq, and argued that he had also "made a lot of sacrifices."

"I've done a lot of work with veterans on PTSD issues," Whitman noted. "Have I sacrificed anything for my country? Absolutely not. The people who sacrificed are people like the soldiers that give their lives every day."

Hughes insisted that the criticism of Trump was "spin of the media."

"Mr. Trump was responding to the question of sacrificing," she explained. "Nowhere ever did he ever say that his sacrifice was equivalent or more or even close to what the Kahn's had given up."

"You know what, creating jobs caused him to be at work, which cost him two marriages," Hughes asserted. "Time away from his family to sit there and invest."

"No, actually being away from his family, he's admitted it," Hughes shot back. "Never did he say that his actual sacrifice was anywhere in comparison. That is the spin of the media and ongoing bias."