Sean Hannity goes ballistic on #NeverTrump Glenn Beck: 'If Hillary wins -- you own it!' 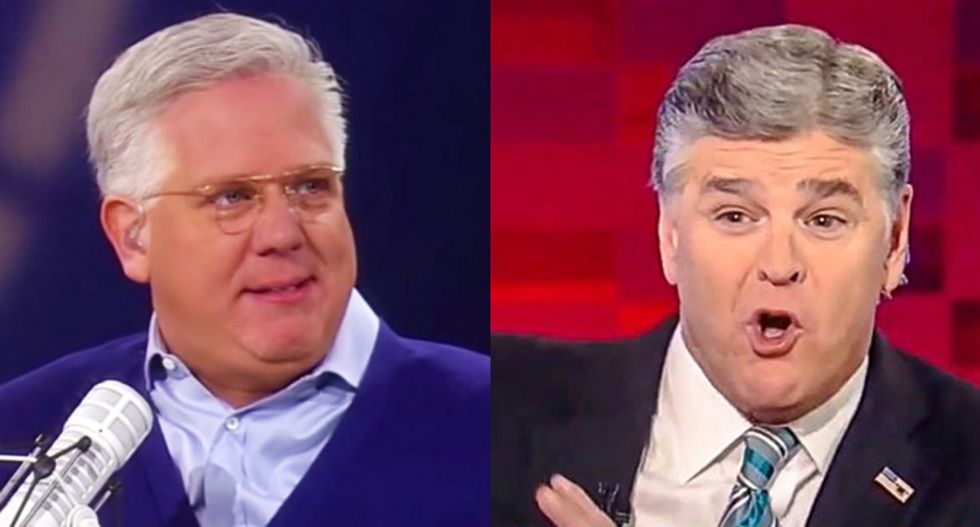 Fox News personality Sean Hannity -- who has turned his television show show into a nightly infomercial for GOP presidential candidate Donald Trump -- used his daytime radio program to unload on conservatives who are failing to fall in line, and directed a great amount of his ire at fellow conservative Glenn Beck.

According to Media Matters, Hannity said he has had enough of conservatives standing on the sidelines as the election grows nearer and the prospect of a Clinton presidency seems inevitable.

While also citing Texas Sen. Ted Cruz as well as the editors of National Review -- who came out against Trump early -- Hannity said he wasn't going to hold back on naming conservatives he will personally hold accountable if Trump loses.

"Let me just say to all of you. And that includes the commentator class. That includes the Jonah Goldberg class, that includes radio talk show hosts. Glenn Beck is like on a — it's a holy war for him at this point. I mean, he's off the rails attacking me every day. Blaming me for Trump. Well, no. I was fair to everybody, Glenn. Whether you want to admit it or not. I know I was fair. My conscience is clear. And I, frankly, I'm proud to pull the lever for Donald Trump with a clear conscience."

"Glenn Beck, I hope you're listening. You own Hillary Clinton's Supreme Court appointments. You own it! You are doing everything you can do to cast doubt in people's minds! Trump gave us a list. You own her Supreme Court nominees, you own her un-vetted refugees and the 550 percent increase she will bring into this country. You own the jobs that illegal immigrants will take from the 95 million Americans out of the labor force. You own Obamacare, which is a disaster for this country," he continued. "And you are going to say, 'Hannity, we blame you. You gave Donald Trump time on your show."

"You own her. You own every dumb thing she's about to do. I blame you. Got it?" he said before threatening, "I'm going to name names regularly if she wins."

Listen to the audio below via Media Matters: