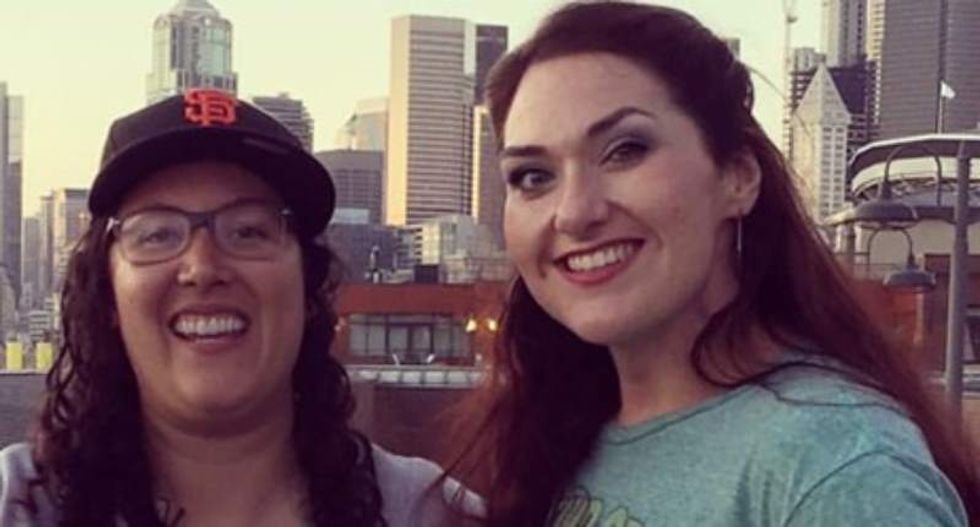 A same-sex couple is getting conflicting responses from the Seattle Mariners baseball team after they were the subject of a complaint during a game last week, Outsports reported.

According to Giuliana Garcia, she was approached by a team usher during a game last Friday and told to stop "being affectionate" with her partner, Calista Nabors, during the game because it was a "family-friendly environment."

Garcia, who said the couple was merely hugging and exchanging a quick kiss, subsequently spoke to a person she described as the guest services manager, and posted a picture of her own complaint which included her assessment of the incident.

"I am shocked and hurt that something like this could happen--it's 2016," she wrote. "Hate is sadly alive and well. It is UNACCEPTABLE. I will not put up with this. We cannot stand for this." 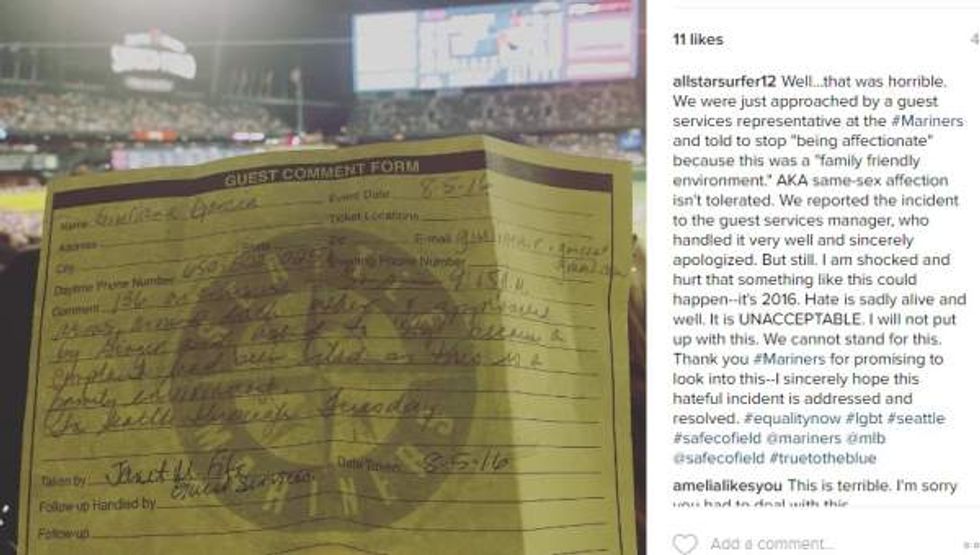 Three days later, she said, she got an apologetic voicemail from the team's senior manager of guest experience, Amy Swisher, saying that the team spoke to the staff member who pursued the initial complaint and "coached her" on what constitutes a violation of the code of conduct for game attendees.

"She feels bad and I'm just kind of appalled by the whole situation," Swisher reportedly stated in her voicemail. "I'm so sorry for what you guys went through. This is not how we treat people. It goes against our beliefs and the Mariners way, and I am, like I said, very very sorry about it."

But Mariners spokesperson Rebecca Hale dismissed Swisher's message as standard protocol on Tuesday, telling Outsports that the usher was free to reject the complaint against the couple, act upon it, or seek help from a senior manager. The team's stance on "displays of affection," Hale said, is based to what she called an observer's "reasonable standard."

"In this case it doesn't appear the [usher] went up the food chain based on her believe that this was behavior that was in conflict with code of conduct," said Hale.

Garcia said Hale's stance was a departure from Swisher's response.

"The entire line they've given me is that they recognized we were just embracing and we shouldn't have been approached in the first place," she said. "So that's interesting that they have never shared that complaint to me in any correspondence. We would never make out in public. We would never do that in public."

Major League Baseball executive Billy Bean said each ballclub is responsible for designing its own code of conduct for its ballparks.

The Mariners came under criticism in 2008 for a similar incident involving a lesbian couple. The team's LGBT Night promotion is slated to be held on Aug. 19.