Seth Meyers rips Trump for booting baby: 'GOP doesn't allow you to change your mind about a baby' 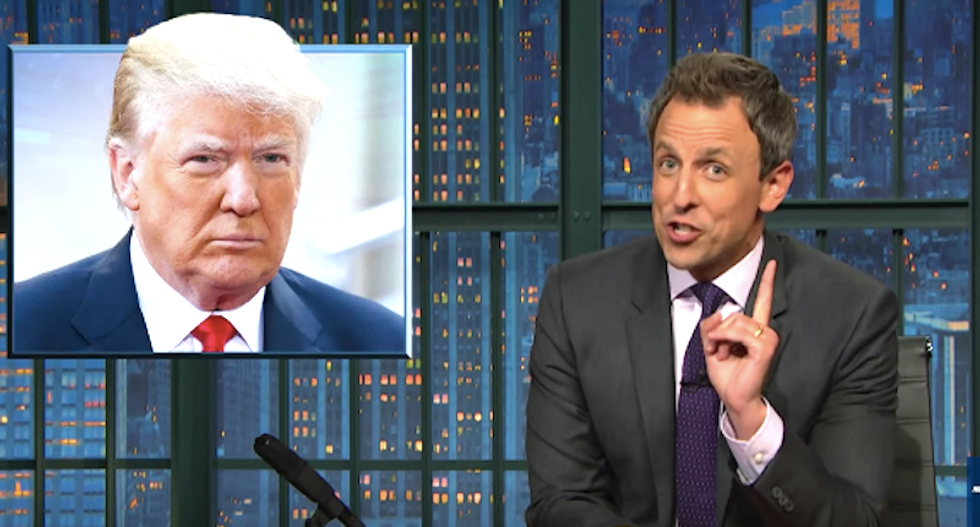 Donald Trump's presidential campaign is a dumpster fire consuming all the oxygen in the news cycle, and taking down the Republican Party as collateral damage.

Top Republicans have backed Trump through months of outrageous insults, ignorant comments and blatant racism, but they finally broke with their party's presidential nominee after he said he would not endorse House Speaker Paul Ryan for re-election.

"This is the final straw?" Seth Meyers said. "Not the racism or the misogyny or the wall?"

Some Republicans are planning an "intervention" with Trump to ask him to "reset" his campaign just two weeks after winning the nomination, but his allies insist he'll behave less erratically as president.

"Actually, it's more like watching a quarterback throw an interception, blame the interception on Mexicans, insult the coach's mother and then storm off the field bitching that the game is rigged," Meyers said.

Mike Huckabee reassured voters that Trump would be surrounded by more knowledgeable advisors as president, and he probably wouldn't continue being a regular Twitter user in the White House.

"Dudes, chill out -- he'll be way cooler and more reasonable just as soon as we give him more power," Meyers said. "You know, the same way drunk people always calm down once you give them back their car keys. And I'm not sure it's all that comforting when the biggest promise you can make about your candidate is, he'll have adults around him and we'll lock him out of his Twitter account. That's how it works with Justin Bieber, and it barely works with him."

Trump's awful week included him asking a mother to take her crying baby out of a campaign rally, just moments after telling the crowd that he didn't mind the interruption and loved babies.

"That is a huge gaffe for a Republican, because the GOP platform does not allow you to change your mind about a baby," Meyers said.

MSNBC's Joe Scarborough revealed that a national security expert had met with Trump earlier this year, and the GOP candidate had asked multiple times why the U.S. never used the nuclear weapons it built and maintained.

Trump made similar comments on MSNBC in May, when he refused to rule out using nuclear weapons to fight Islamic State militants -- or even in Europe.

"He won't even rule out nuking Europe," Meyers said, before slipping into a Trump impersonation. "And if Paul Ryan doesn't get in line, I'm not ruling out Wisconsin, either. Enjoy your cheese while you can, you sons of bitches."

Warren Buffett, the billionaire investor, harshly criticized Trump's business acumen, saying the real estate developer's investors would have been better off following the advice of a monkey throwing darts at stock pages.

"Incidentally, monkey with a dart is likely to be Trump's first choice as secretary of defense," Meyers said, slipping into another Trump impersonation. "Who should we invade next, Mr. Patches? Chuck one at the map. Very well, the ocean it is."

With his poll numbers plummeting, Trump is setting up a fallback plan by claiming the election is rigged.

"What evidence does Trump have for this far-fetched conspiracy theory?" Meyers wondered. "Trump offered this ironclad evidence: 'I just hear things, and I just feel it.' That's right, he can detect voter fraud just by feeling it. He's like a demented 'Mentalist' -- he's the 'Dementalist.'"