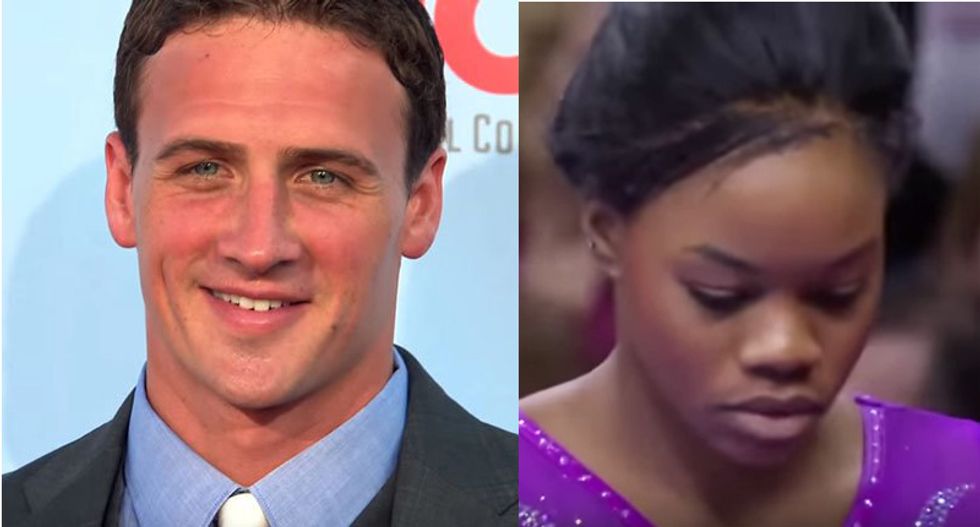 This is a thought experiment:

In recent months, two amateur swimmers  have been involved in high-profile incidents that pose serious questions about the ability of white males to behave away from the pool without bringing embarrassment to their communities. When confronted with their behavior, each young white man blamed outside entities for his actions, a failure to take responsibility for his shameful behaviors. This irresponsibility may be the result of home lives in which the boys were raised without any kind of constructive discipline from fathers who seem more invested in glorifying their sons' athletic careers rather than teaching them how to behave like civilized men out in the world.

Brock Turner, a swimmer for Stanford, was convicted of raping an unconscious woman behind a garbage dumpster. Despite being apprehended by two foreign students who were riding past Turner's assault on "Emily Doe," the white swimmer failed to apologize for his abuse of another human being. This may be due to a historical tendency within the white Christian community to demean the feminine and traffic in stereotypes of women that see them as lesser than men.

Ryan Lochte, a 32-year old man who was competing in his fourth Olympic Games (he had previously won Olympic medals  in Athens, Beijing, and London) was involved in an altercation with a security guard after damaging private property at a petrol station outside Rio, where Lochte had been competing as a representative of the United States Olympic team. Lochte had initially claimed that he had been robbed at gunpoint by faceless men speaking a foreign language. Investigation by Brazilian police revealed that Lochte's story was a complete fabrication, and the USOC issued an apology for the international incident that Lochte's story had triggered.

Upon Lochte's return to the U.S., he issued a statement on August 19, on his Twitter account, which read in part,

I want to apologize for my behavior last weekend -- for not being more careful and candid in how I described the events of that early morning ... It's traumatic to be out late with your friends in a foreign country -- with a language barrier -- and have a stranger point a gun at you and demand money to let you leave ...

Despite evidence of the act of vandalism that triggered the confrontation between the security guard and the staff at the petrol station, who wanted to be compensated for the damage from the swimmers, Lochte failed to acknowledge the original crime, nor apologize for the act of vandalism itself. He merely apologized for not being "more candid." This euphemism for lying is further evidence that white males who swim do not know how to behave outside the natatorium.

Rather than admit that he had commited rape, in his statement to the judge, Turner blamed his actions on having consumed too much alcohol. As he explained to the presiding judge: “I want to demolish the assumption that drinking and partying are what make up a college lifestyle. I made a mistake, I drank too much, and my decisions hurt someone.”

Brock Turner showed no remorse for having traumatized the victim of his assault, but did reflect on the impact that his attack on Emily Doe had had upon him: “I’ve been shattered by the party culture and risk taking behavior that I briefly experienced in my four months at school," he wrote, in his statement requesting leniency from the magistrate.

Some have speculated that white males are taught that their athletic prowess, especially in the swimming pool where endorsements may earn them millions of dollars, is a more important aspect of their lives to develop and should take precedence over their college educations. It has been suggested that the white community needs to come to grips with the messages that are being conveyed to its young men regarding their abilities as swimmers when they should be being taught valuable skills that will make them productive citizens.

Imagine that this is how Ryan Lochte's behavior was being written about. Rather than being seen as reflective of either a type of boys-will-be-boys mixed with the-ugly-American that has caused at least some American media outlets to tut-tut at Lochte in disgust, imagine if the fact that two high-profile white swimmers' behavior was being seen as somehow reflective of the behavior of an entire ethnicity or an entire group of people.

If an act of terrorism is committed by a man with an Arab-sounding name, for some, this is all the proof they need that "all Muslims are terrorists." When floods cut off access to all services in a local area, and a television camera crew films people breaking into stores to take diapers and food, if the perpetrators are white, expect them to be referred to as "flood victims" seeking resources; if they are black, expect them to be referred to as "looters."

And yet, no one, other than me, is suggesting that because both Ryan Lochte and Brock Turner are white, this means that there's a problem with white guys who swim and the white community needs to be having a conversation about young white men. While rape victims can expect to be asked why they were out late at night, or what they were wearing, Lochte does not appear to have gotten in trouble for leaving the Olympic Village. Lochte also tapped into familiar stereotypes of crime when he claimed that he and his friends had been held up by an armed bandit who gave him distinct orders apparently in English, Lochte now claims that there was a "language barrier."

While he has not gone so far as to claim that he and his friends were robbed by men of color, he benefitted from the immediate media narrative that built upon groundwork previously laid that Rio was a dangerous city in which to host the Olympic Games. He used his whiteness to make his being a victim a fact that he expected to be incontrovertible. What he didn't expect was for there to be videotape.

For those who continually argue that white privilege doesn't exist, Ryan Lochte is proof positive that it does. If Ryan Lochte had been black, there would have been "think pieces" from the right demanding that the black community educate its young men on how to behave on a national stage, on how to behave if they are going to represent America. Yes. There is agreement that Ryan Lochte behaved like an "ugly American," but he's still an American. It's about his behavior as an American, not as a white man that is under discussion. But when Omar Mateen, a man who was born in the United States, committed the horrible acts of murder in Orlando Donald Trump, who is a major party candidate for president, said that it was only "common sense" to profile ALL Muslims because of the actions of a few.

In addition, both Turner, by denying that the rape occurred, and Lochte, by falsely reporting a crime, make it that much more difficult for crime victims to be believed, especially for crimes such as rape, which are often dependent on the testimony of a victim to proceed with prosecution. Not only did Lochte benefit from being white, he also benefitted from being male.

Gabby Douglas, the gymnast, was accused by Fox News during the 2012 Olympics of not being patriotic "enough" because she did not wear a red, white, and blue leotard while competing. Douglas went on to win the all-around medal, the first black American female gymnast to do so. During the 2016 games, Douglas was criticized for failing to put her hand on her heart during the playing of the American anthem. Meanwhile, Lochte commits a crime and lies about it, and, despite being 32, his act is being treated as the expression of some kind of adolescent hijinks.

Perhaps the next time the media is tempted to ask the black community to police its young, or a rape victim is asked why she was out late at night, someone would be good enough to remind them of this article.

President Donald Trump has attacked Rep. Liz Cheney (R-WY) for the past several months after she said that the 2020 election wasn't fraudulent. Since the, he and his supporters in office have decided she can't be in the GOP leadership. Instead, they've opted to support another Republican with her own anti-Trump background.

"At one point Trump wrote she's a 'warmongering fool who has no business in party leadership' and 'Elise Stefanik is a far superior choice and has my complete support for conference chair,'" said anchor Jake Tapper. "Is Trump pulling the strings?"