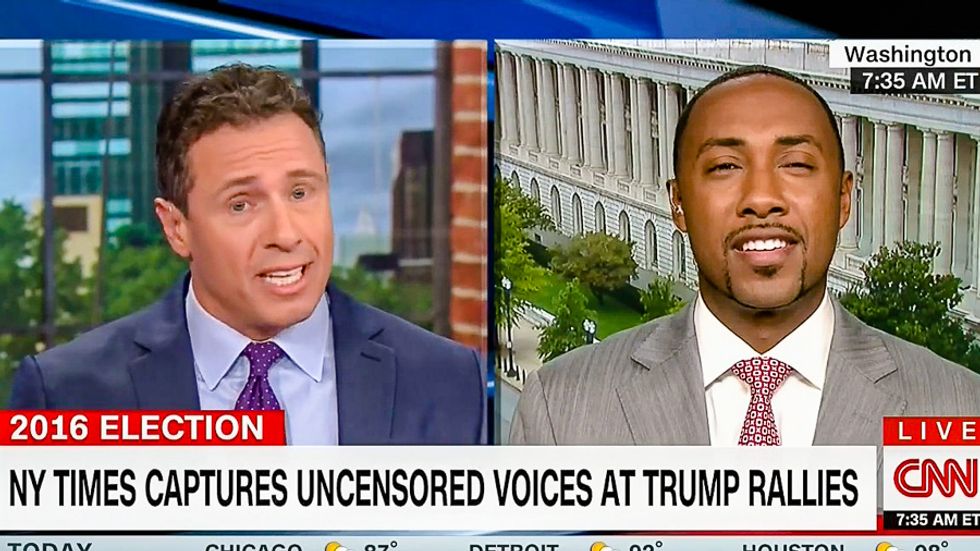 Ashley Bell, Donald Trump's newly-appointed director of African-American outreach, said on Wednesday that he did not intend to excuse the use of the N-word and other epithets at campaign rallies by suggesting that it was only a reflection of supporters' "frustration with the system."

On Wednesday, CNN's Chris Cuomo asked Bell if racial slurs and hateful rhetoric at Trump's rallies would make it more difficult to bring aboard black voters.

Cuomo pointed to a recent uncensored New York Times video of Trump supporters which, according to the paper, "provides eye-opening examples of how Trump supporters often express their views in angry and provocative ways. As viewers are alerted before the video starts, it contains vitriolic language and racial and ethnic slurs."

In a clip of the video presented to Bell on Wednesday, a Trump supporter could be heard yelling "Fuck that n****r" in reference to President Barack Obama.

"How do you explain to a non-white voter that this atmosphere that is often -- not once, not twice, not three times -- is often in play at Trump events?" the CNN host wondered. "That that's nothing for them to be worried about, that this is your home?"

Bell asserted that Democratic rallies included "frustrated young black voters, members of a different movement upset at the Clintons because of the failed criminal justice policies of the '90s. I heard a lot of them frustrated saying a lot of awful things."

"But that's not a reflection of Hillary Clinton's campaign as much as it is the frustration of America, he continued. "The frustration on both sides -- black and white are frustrated with the system."

"So you can't just look at that group and say that's a reflection on Donald Trump," Bell concluded. "It's a reflection of the frustration. The reason he's our nominee is because people are frustrated. Because they don't want another insider, another secretary of the status quo."

Update: In a statement to Raw Story on Wednesday, Bell said that the idea "that a black person would not condemn the N word is offensive and ridiculous."

"During my interview this morning on CNN, I was not in studio," Bell explained. "I was via satellite and could not see what was being played live. The audio was bleeped out on the clip. All that could be heard were angry voices. My comments were about that frustration and the frustration of many Americans with the status quo."

A spokesperson for Bell also clarified to Raw Story that Bell condemns epithets targeting Hispanics and any other racial slurs in the New York Times video.