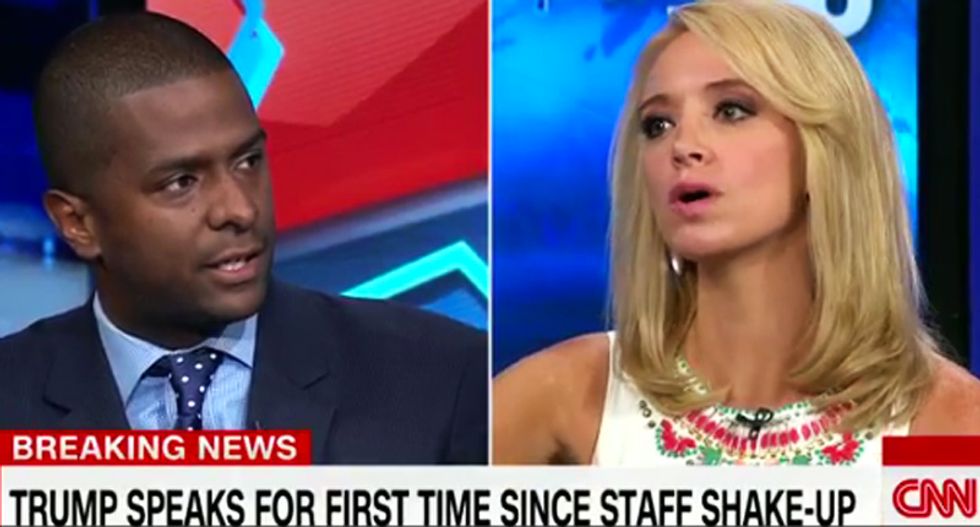 A CNN discussion on black voters and why they won't vote for Donald Trump went off the rails Thursday night when panelist Bakari Sellers unloaded on Trump spokesperson Kayleigh McEnany -- calling her "disrespectful" -- for attempting to speak for the black community.

After McEnany attempted to use faulty unemployment numbers to drive up the percentage of African-American without jobs, she then rattled off a series of stats about the black community in order to drive home the point that she believes they have suffered disproportionately under President Obama.

"I guarantee you if you go into the inner cities and ask the people who live there, 'Are you better off today than you were eight years ago?' the answer is absolutely not," McEnany stated, causing Sellers to jump in.

"I'm going to throw this out there. I'm going to be pretty blunt" he began. "I'm African-American, we did know that? And so I live in these communities, I am part of this community. And what Donald Trump said today, his plea was that 'You know what, what else do you have to lose?' It was very naive, it was very insulting, because the fact of the matter is that Donald Trump has no comprehension of intersectionality. The fact is, you don't have a comprehension of intersectionality."

Sellers attempted to tick off the systemic problems facing black in the U.S. only to have McEnany jump in saying, "You're making my point!"

"No, I'm actually not making your point," Sellers shot back.

"Because of the simple fact that Donald Trump can't comprehend that," he then continued. "You cannot say that of someone who got sued twice by the Department of Justice for failure to rent to African-Americans. You can't say that of someone who took out a pro-death penalty piece for the Central Park five. You can't simply say that somebody who started the birther movement all of the sudden cares about intersectionality and African-Americans!"

Watch fiery debate between @Bakari_Sellers and @kayleighmcenany over Trump's attempt to win over black voters: https://t.co/fri7yw1MkL