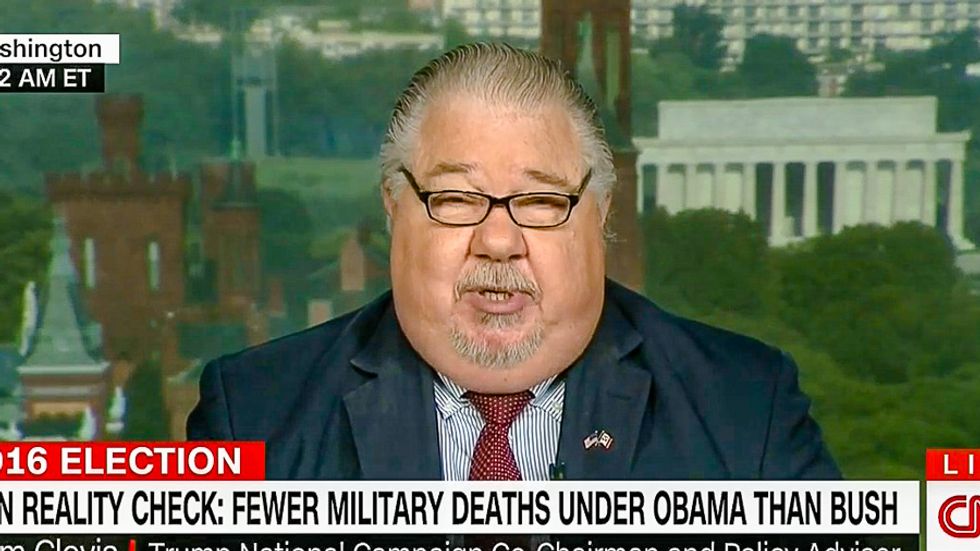 Sam Clovis, the national co-chair of Donald Trump's presidential campaign, suggested on Thursday that Katrina Pierson had been reprimanded or worse after she blamed President Barack Obama for the 2004 death of a soldier.

Earlier this week, Pierson had said that Army Capt. Humayun S.M. Khan, whose father supports Hillary Clinton, had died because Obama changed the rules of engagement although George W. Bush had been president at the time.

Pierson admitted that she was wrong during a CNN appearance the next day, but incorrectly stated that "tens of thousands" of troops had died in Iraq since 2004.

During an interview on Thursday, Clovis told CNN that he didn't want to throw Pierson under the bus as he seemed to be doing exactly that.

"I didn't see that. I have no way to comment on that," Clovis said, adding that CNN would "have to talk to Katrina" to get the source of her troop casualty information.

"You're all part of -- allegedly -- a concerted campaign effort," CNN's Alisyn Camerota noted. "Are facts important to your campaign?"

"But when something like that happens," Camerota pressed, "and there's erroneous facts put out by the campaign, then what happens inside the campaign the next day?"

"Well, I think we're fixing it," Clovis revealed. "I guarantee that won't happen again with her. That's for sure. And it won't likely happen with anybody else. Because when you do go out, you have a responsibility -- and again, I think as a person who spends a lot of time on your show, I think it's important to come on here and have accurate information and present our case in the best possible way we can."