‘Yes or no?’: Trump-loving black pastor refuses to say whether Trump is a racist or not 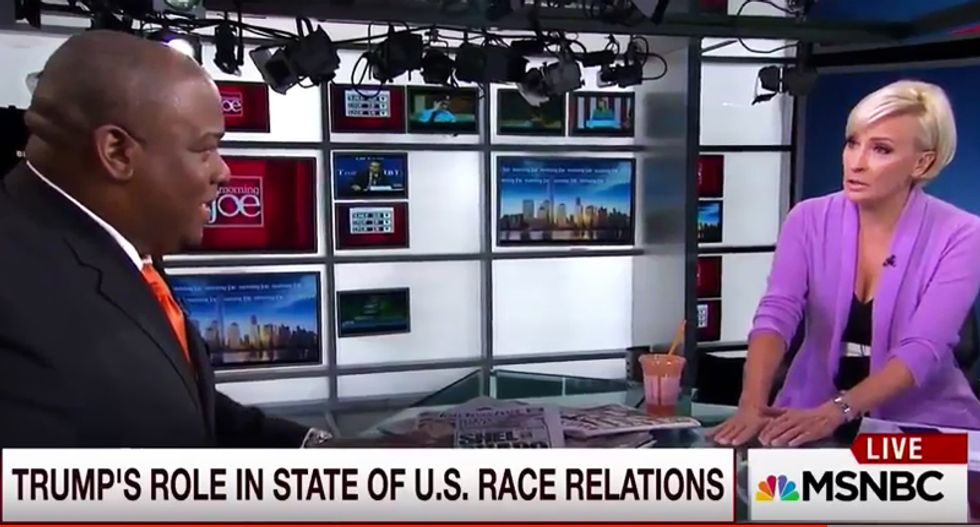 The campaign of Donald Trump keeps running out new advocates to prop up the notion that the candidate has something to offer the black community and they continue to fail.

Friday morning, Trump-backing Pastor Mark Burns appeared on MSNBC's Morning Joe to try and make the case for Trump with black voters, only to run into a very patient -- but insistent -- Mika Brzezinski who insisted he address Trump's racist rhetoric during his campaign.

"When he made the comments about the judge saying he's a Mexican, was that racist or not?" Brzezinski asked.

"Well, I think --" Burns began before the morning host cut him off, reemphasizing, "I just want to know if that is racist or not. Then I can move on with the conversation, but I need to know where you stand on things in terms of reality. So, were those comments racist or not?"

"Well, I think it’s important to understand," Burns replied. "I think if I was in Mr. Trump’s shoes and I had a very controversial policy that offended many millions of, potentially millions of Hispanic people--"

"But you know he was not, he was born in America. Were the comments racist or not? I just want to know." Brzezinski pressed.

"Well, let me finish my statement," the pastor parried.

"Let me give you my answer the way I would give it to you so we can move forward. We’re telling the story," he replied.

"If I was in Mr. Trump's shoes, I don't think it was racist," Burns finally stated, before adding, "I know what real racism is."