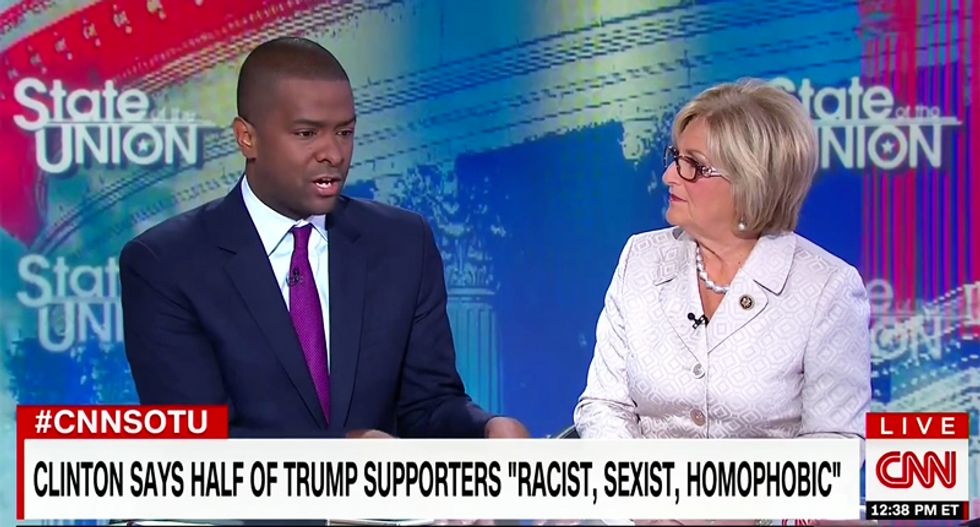 After listening to a GOP congresswoman express more concern about supposed name-calling by Hillary Clinton and Donald Trump than the GOP candidate's racist followers, political analyst Bakari Sellers set her straight about the mainstreaming of white nationalism by Trump.

Appearing on CNN's State of the Union, Rep. Diane Black (R) took a swipe at Hillary Clinton's "basket of deplorables" comments regarding the "racist, sexist, homophobic or xenophobic" fans of Trump, saying both candidates need to focus on more on issues and less on insults.

"I think for presidential candidates, they need to get away from this name-calling on both sides," the Tennessee congresswoman explained. "This is about teaching our children and our grandchildren on how to act. Of how to have healthy relationship with other people who disagree with you."

Saying he agreed with her "wholeheartedly," Sellers responded by laying out the case for calling some of Trump's supporters for what they are.

"I don't have much respect for bigots, for misogynists, for xenophobes," he told her. "For him to embrace that at certain points -- I was backstage, on set, when Jake Tapper asked him multiple times about David Duke, and he embraced that. He did not repudiate that."

Given a chance to respond, the congresswoman remarked, "I agree with that. I don't even like it when folks in my own party call each other names."