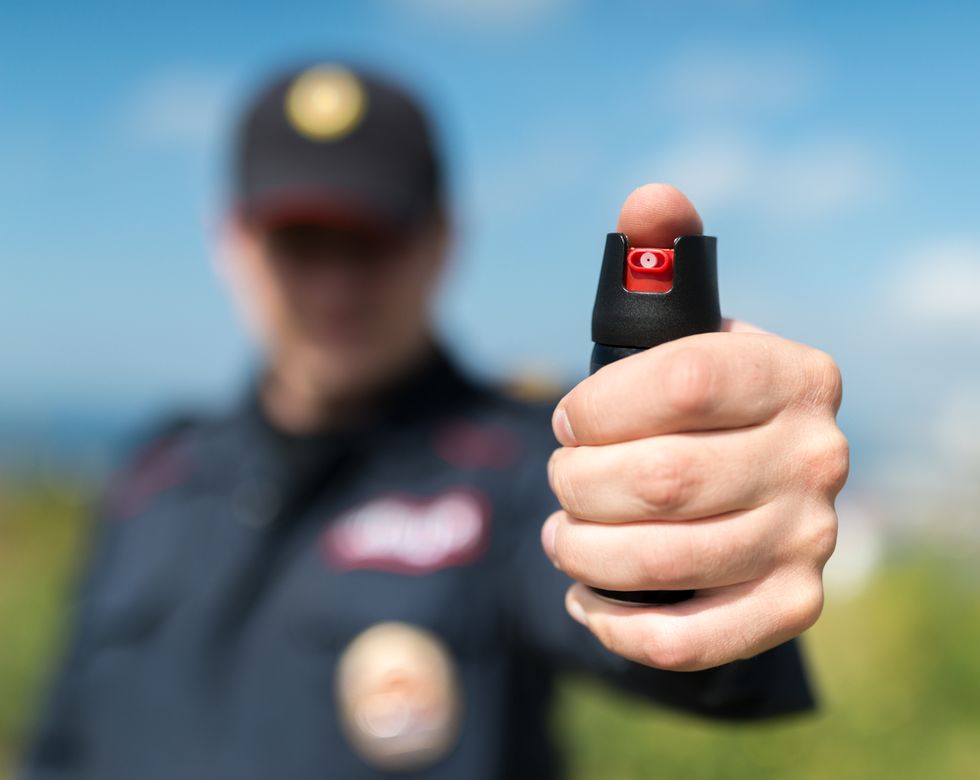 A police officer holds a can of pepper spray (Shutterstock.com)

Police in Hagerstown, MD are under fire after a video surfaced showing them pepper-spraying a handcuffed teen girl after she tried to leave the scene after being struck by a vehicle.

The Hagerstown Herald-Mail reported Wednesday that a Facebook video of police manhandling the 15-year-old girl has got the police department scrambling to explain itself.

Attorney Robin Flicker met with the girl and her mother on Monday and posted video of the disturbing attack on his Facebook page.

According to Flicker, the girl -- who is the daughter of a white mother and a black father -- was riding her bike on Sunday afternoon when she was struck by a car. She hit her head on the pavement and blacked out for about 30 seconds.

She came to somewhat dazed, checked herself for injuries and then got back on her bike and attempted to ride home. Passersby stopped her and urged her to go to the hospital when police and an ambulance team arrived.

The girl said she didn't want to go to the hospital and tried to leave. Police officers reportedly grabbed the girl -- who is only five feet tall and weighs about 105 pounds -- and hauled her bodily off the bike.

An officer lifted the girl's hands above her head from behind and slammed her face into a wall. Her chin smashed into a window-sill, at which point the girl reportedly became terrified and began to struggle with officers.

Handcuffed and shoved into the back of a police cruiser, the girl refused to pull her feet into the vehicle so officers could lock her in. This is where the upsetting video begins.

"(P)ut your feet in the car, OK, or you're going to get sprayed," an officer said.

The girl pleaded with the police officers -- who were all white -- to call a black officer who knows her family named "Zack."

A bystander asked the officers why they were treating the girl like a criminal, only to be told that as a minor, the girl is legally not allowed to refuse treatment.

"What happens...when she's like, 'I'm fine,' right, and has a brain injury or something like that, and then she could die later?" the officer said. "And she's going to come over here and fight us when all we want to do is make sure she's OK."

The officers shut the door and then unloaded a can of pepper spray into the back seat of the cruiser through a cracked window. In the video, the girl can be heard screaming and crying out that she can't breathe.

After gassing her in the back seat -- and in spite of their insistence that the teen needed immediate medical attention -- police took the teen to the police station to be booked for disorderly conduct, two counts of second-degree assault, possession of marijuana and failure to obey a traffic device.

The girl's father picked her up from the police station and drove her to Meritus Medical Center, where -- three hours after she was sprayed -- medical staff washed the burning chemicals from her eyes and face.

"The only treatment she got (from police) was slamming, abuse and Mace," Ficker said. He also said the police contacted the hospital and ordered them not to take any photos of the girl's chemical burns.

On Wednesday, Hagerstown Police Capt. Tom Langston said that his department is trying to piece together what happened.

Watch video of the incident, embedded below via Facebook.com: