Can Marco Rubio spend his way back into the Senate? 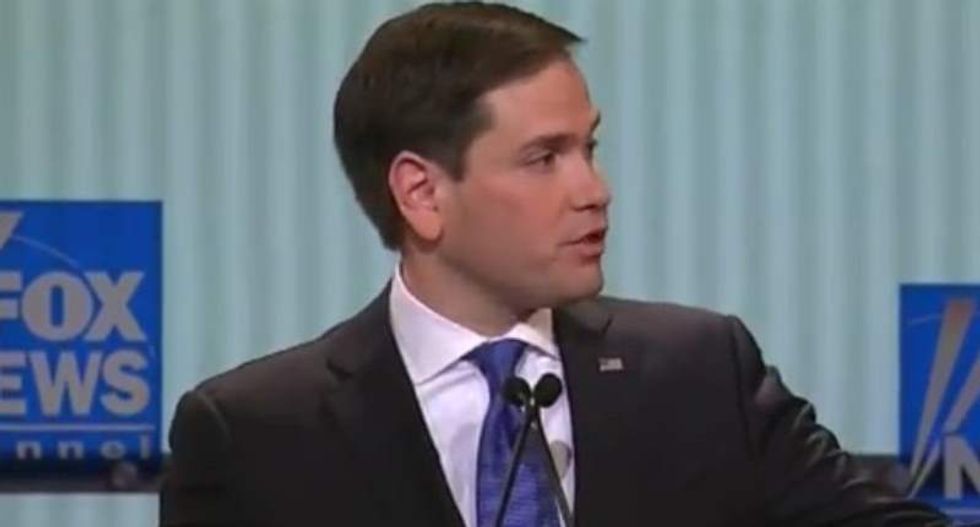 Republican Marco Rubio, the failed U.S. presidential contender, is battling to hold on to his U.S. Senate seat from Florida in what is shaping up to be the costliest congressional contest of 2016.

More than $33 million has been raised and over $24 million spent so far by both parties in the Florida race, according to the latest U.S. Federal Election Commission data.

That high price tag testifies, in part, to Rubio's success in building a national fundraising base as a presidential candidate, even though he was trounced in his own backyard by eventual nominee Donald Trump in the state's Republican presidential nominating contest.

Rubio's re-election bid, launched late in the game in June, is bolstered by the deep pockets of the Senate Leadership Fund. The group's mission is to protect the Republican Senate majority in the Nov. 8 election. It is run by confidants of Senate Majority Leader Mitch McConnell.

So far, the group has devoted more money to Florida than any other state, spending $3.4 million to attack Rubio's Democratic opponent, U.S. Representative Patrick Murphy, according to the Center for Responsive Politics, a watchdog group.

The Republican fund is sitting on a mountain of cash - at least $40 million on hand for the closing weeks of Senate campaigns nationwide. That looks to be having an impact.

Rubio led Murphy by an average of 5.7 percentage points on Wednesday in RealClear Politics' basket of polls for Aug. 31 to Sept. 19.

With that in view, the Democratic Senatorial Campaign Committee has decided to scale back its plans for television and internet advertisements for Murphy in Florida to $6 million from $10 million between now and Nov. 8, a DSCC official said.

Even the remaining money is being held back until the final three weeks of the campaign, the official added.

Instead, Democrats are redeploying into lower-cost media markets in North Carolina, Missouri and Indiana, according to the DSCC, which works to elect more Democrats to the Senate.

MURPHY DOWN, NOT OUT

Until June 22, when Rubio decided he wanted to return to the Senate despite a low attendance record in his first term, Democrats saw Florida as low-hanging fruit. That was because Republicans had fielded a roster of candidates with limited statewide appeal and money-raising ability.

Rubio, hoping to remain a rising Republican star with an eye on a 2020 run for president, quickly cleared the field, knocking out his last Republican opponent, a wealthy political novice, and setting up his race against Murphy.

Despite the money disadvantage, Murphy is by no means vanquished. A Sept. 16-19 poll by Monmouth University had Rubio leading by only 2 percentage points, and showed Murphy enjoying a 14-point lead in Rubio's home base of South Florida.

If the numbers improve further for Murphy, the DSCC could readjust and, like a race-track bettor, scurry to plunk down millions of new dollars in a renewed Florida push.

While money plays an outsized role, it is not everything in this freewheeling U.S. election season. For instance, the political fortunes of Republican presidential nominee Trump could benefit other Republicans, including Rubio. Trump has opened a 4-point lead against Democratic presidential nominee Hillary Clinton in Florida, according to the latest Reuters/Ipsos polling.

In a Senate hallway interview, Rubio downplayed any Trump effect, even a positive one, saying: "I always feel like I need to win my own race." Rubio has endorsed Trump, but clashed sharply with him when they were presidential rivals.

U.S. Senator Roger Wicker of Mississippi, who heads the National Republican Senatorial Committee emphasized the importance of Florida to Republicans' hopes of keeping control of the Senate.

Asked about Democrats refocusing resources from Florida to other states, Wicker said: "If they take their money out and put it someplace else, we'll combat it there," adding: "We are going to stay vigilant in the state of Florida."