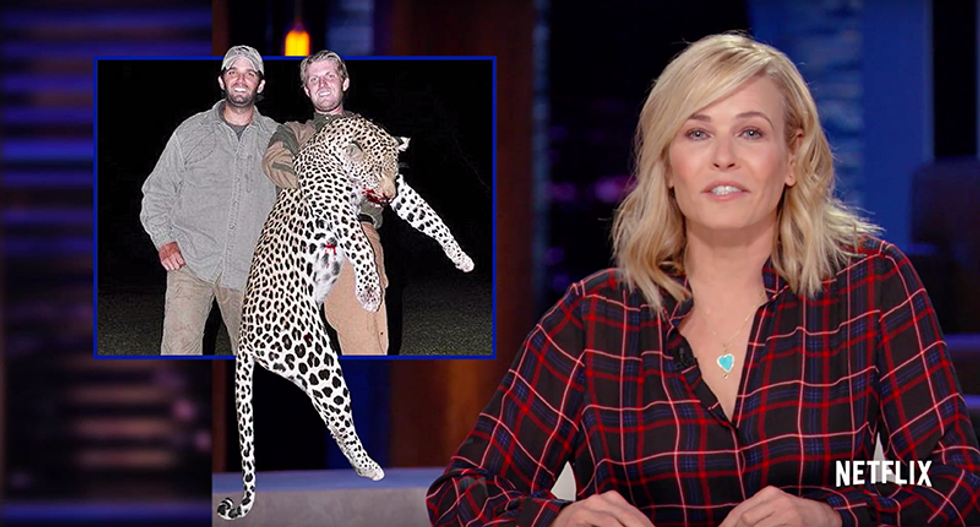 Chelsea Handler admitted she's really going to miss President Obama and his family when they leave the White House in January. In a kind of love letter to the "good times," the Netflix host lamented she'd miss Obama and fears the new family that could come in.

"I was midway through the debate when it hit me, we're going to have to say goodbye to the greatest family on the planet. And no I'm not talking about these assh*les," Handler said, flashing a photo of the Duggars.

Handler remembered that it seemed like only yesterday when the Obamas danced at their first inauguration. "Remember? That was the night racism finally ended. Thank god that's behind us," she said sarcastically.

Handler has no idea what America will do without First Lady Michelle Obama. "She's smart, she's sophisticated and no matter where you fall on the gun debate, she's got two that everyone can agree on," Handler said, showing Mrs. Obama flexing her biceps. Of course, if Hillary Clinton wins, we probably won't have former President Clinton wondering around in sleeveless dresses.

When comparing the Obama children to potential First Kids Eric and Donald Jr., Handler showed how stark the contrast is. "Look at them playing with their dog Bo! Isn't that cute?" Handler said, showing a photo of Sasha and Malia Obama. "Now, let's take a look at how the Trump boys play with animals," she said, showing photos of the Trump children holding the carcass of a dead cheetah they shot on safari in Africa. "Two assh*les in their natural habitat."

Calling him her "boo," Chandler named President Obama's greatest achievements but marveled at his unique ability to hold and soothe a crying baby on a rope line. "Who's going to hold me and stop me from crying when he leaves office?" Handler wondered.

Handler confessed she's going through all of the stages of grief as if the end of the Obama administration is some kind of bad break up. Even though many are sad, she admitted the family is probably looking forward to getting back to their old life.

"He's finally going to be able to drive around blasting his uncensored Spotify list and chain smoking and getting pulled over by the cops for no reason," Handler jokes.

She then begged Obama to run again for office, "Just because I've never made it to a third term doesn't mean you can't."