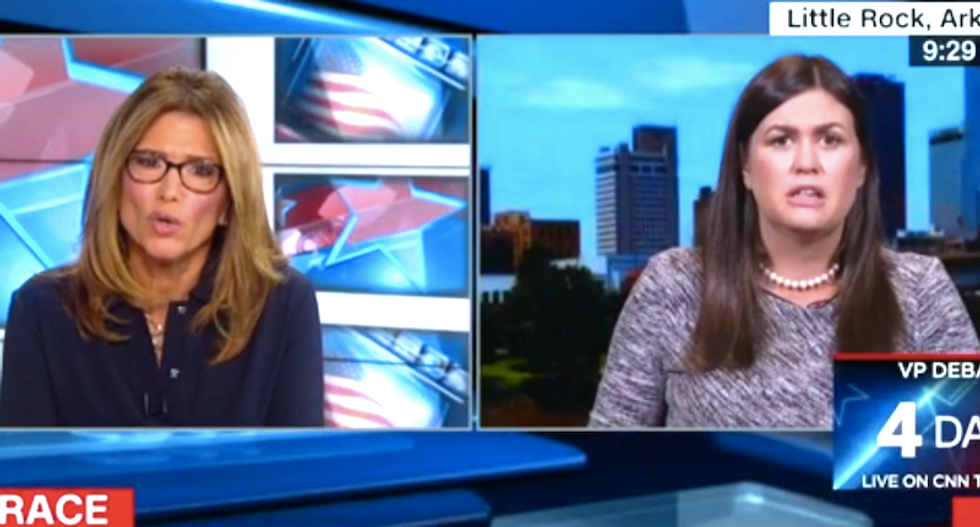 Sarah Huckabee was all out of answers when she was grilled on CNN about Donald Trump's overnight tweet storm smearing a former beauty pageant winner he's bullied for decades.

The campaign advisor insisted that Trump urging voters at 5:30 a.m. to "check out sex tape" showed that the Republican presidential nominee would not back down from a fight, even if it was against a former Miss Universe whose weight he has insulted since she won the 1996 pageant he owned.

"Any time Donald Trump is attacked, he's going to counter-attack, and that's exactly what has happened here," Huckabee said. "Hillary Clinton and a lot of people in the media are coming after him, and he's going to respond."

CNN's Carol Costello asked whether Alicia Machado deserved to be smeared -- without any evidence -- by the GOP nominee for allegedly appearing in a pornographic video, and Huckabee paused.

After a pause, Huckabee said her boss had been the victim of unfair treatment by Clinton and her liberal allies, who have poured money into negative campaign ads against Trump.

Huckabee stammered, and said the American people deserve better than Clinton -- but Costello pressed her again.

"The sex tape that Donald Trump is talking about is from a Spanish reality TV show, and she was under the covers -- it's not a sex tape," Costello said.

Huckabee said voters deserved a president who would talk about the economy, national security and other important issues facing Americans -- but Costello refused to let her wriggle off the hook.

"He's just responding to an attack," Huckabee said. "Look, Hillary Clinton brought this issue up because her record is so dismal, it's full of failure. She spent 30 years in government, she has nothing to show for it."

Costello asked why Trump didn't focus on that, instead of repeatedly insulting Machado.

"We have been talking about that, but unfortunately the media wants to talk about this," Huckabee said, and then complained at length that she's never invited on TV news to talk about substantive issues.

"Your candidate was up at 3 a.m., tweeting out these things, these false allegations against this woman," Costello said. "So he's the one keeping this in the news."

Costello then said she'd interviewed a former Miss Wisconsin, who said Trump had helped her battle terminal illness and served as an emotional support.

"She gave a wonderful interview supporting Mr. Trump -- why doesn't he point that out?" Costello said.

Huckabee agreed that would be a good idea, but she said Trump had instead decided to push back against Machado's revelations.

"Hillary Clinton constantly wants to use these sad distractions so that she doesn't have to talk about her own record," Huckabee said, again lamenting that she was again stuck talking about Trump's early morning tweets.

Costello said she agreed, but she reminded Huckabee that her boss spent hours before dawn raging against his critic on social media through false claims and innuendo.

Huckabee recited the talking points she'd been sent out with.

"Donald Trump is simply responding to attacks that have been made against him," Huckabee said. "He's made it very clear, when he's attacked he is going to respond, and that's what he's doing today. But again, I think the media can easily change the narrative of this race. Let's talk about the things that Americans care about."

“Clinton wants to use these sad distractions so she doesn’t have to talk about her own record”- @SarahHuckabee https://t.co/1XdBZegHiy