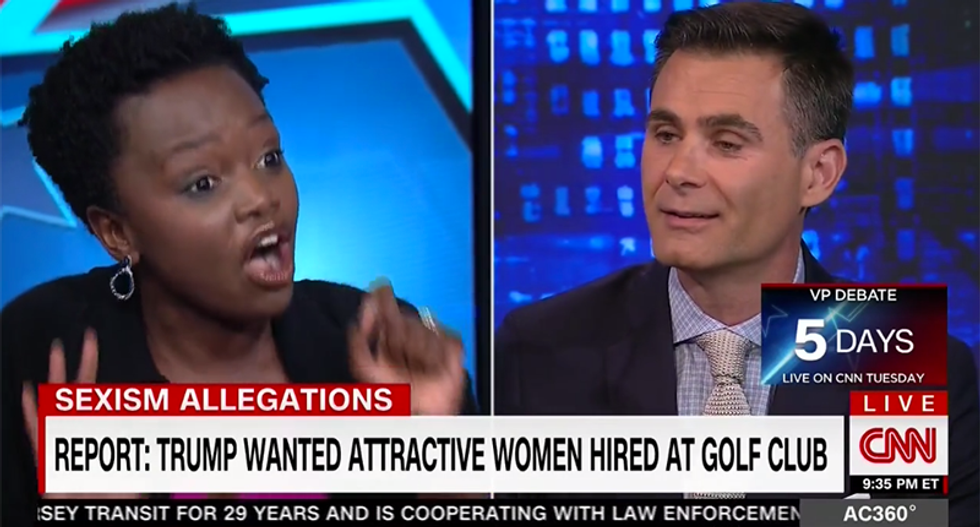 In a panel discussion on CNN's AC360, surrogates for Republican candidate Donald Trump maintained that their candidate was not a fat-shamer and actually had a "pretty good record" when it comes to women.

Trump surrogate Kayleigh McEnany tried to claim that because only two women accused Trump of having them fired because of their apparence out of 34,000 Trump employees, that Trump doesn't have a problem.

CNN commentator Christine Quinn disagreed. "It's not a good record. And I think Kayleigh is trying to misrepresent the numbers and enlarge the pool trying to make Donald Trump look better. You had in this report and in these sworn declarations, that you could be charged with perjury. We have yet another pattern of Donald Trump's own behavior and own words showing the he treatens and sees women very badly."

Quinn also noted that the women who came forward did so knowing that it could cost them their jobs. "And it's not easy," she continued. "You know, Kayleigh seems to present it as it's easy to come forward and say these things are happening in the workplace. It's not. you could risk your job and your livelihood for your families."

McEnany attempted to interject and pivot to Clinton, but Quinn wouldn't let her. "This isn't about Hillary Clinton. This is about Donald Trump," she said. "Treating women as they ar property. Having hostesses, as the reporter said, brought over to him and men he was entertaining, as if they were item on display. A dessert tray to pick from. That is sexist, it's not appropriate, and it sure should not be in the white house. It's just another example of donald trump's sexism against women."

Conservative Andre Bauer tried to chalk it up to a "disgruntled employee," but panelist Karine Jean-Pierre explained that this is just more examples of a pattern.

Bauer tried to claim that no one heard any of the fat shaming comments come out of Donald Trump's mouth, but the panel resoudly dencounced the claim.

"Yes, yes, you've heard him call women pigs, dogs -- on the debate stage!" Jean-Pierre exclaimed. "This is what he's said. He is not a person our daughters can look up to. The makeup of population in this country is more than 50% women. He does not see women as equal to men."

Cooper later acknowledged that Trump makes most of his employees sign non-disclosure agreements that would preclude them from coming forward to tell some of the stories about Mr. Trump that his campaign says is necessary to make a full conclusion.

When it comes to the Miss Universe scandal, both Bauer and McEnany attempted to make the claim that Trump was standing up for Alicia Machado because the pagent board wanted to kick her out.

"Saying 'she's an eating machine,' that's standing up for her?" Cooper asked.

"He didn't have a sweat suit on, on national TV," Quinn fired back.

Cooper agreed. "But i didn't see him in shorts, working out in a room full of reporters. In fact, I have yet to see him in anything other than a very large jacket." Bauer tried to fire back that Trump claimed he would work out with her but Cooper wasn't buying it. "It was his press conference! He could have worked out with her. But come on, you've got to say, there is a pattern of him repeatedly -- this is not a political statement. There is a pattern of him repeatedly and publicly talking about women's weight."

Check out the full meltdown below: