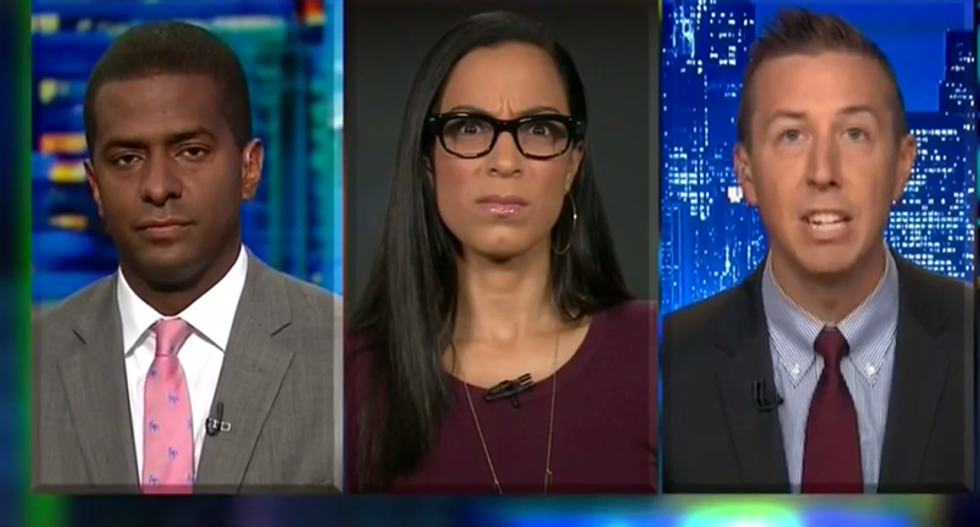 Trump suggested that the New York and New Jersey bomber would have been captured if the United States engaged in the type of racial and religious profiling that Israel does. That type of profiling only occurs at airports, but since Ahmad Khan Rahami is a U.S.-born citizen it wouldn't have done anything to help.

Phillips blamed the "culture of political correctness" caused by Hillary Clinton and President Barack Obama for terrorism. “If you go back to clock boy, when all of that was going on in the state of Texas, and those teachers saw something they thought was suspicious, they dropped a dime and were roundly criticized as bigots,” he said, referring to Ahmed Mohamed, who crafted a clock from some scrap parts and was accused of bringing a bomb to school.

Rye shook her head. "I was taking offense to the term clock boy," she began. "I'm interested to see what John thinks happened there. I think the bigger issue here is what Donald Trump's response was today, which was to encourage profiling."

Rye cited scholarly research that proves profiling doesn't work and often only exacerbates problems. "I know that Trump team is allergic to actual facts and research and data, but research demonstrates profiling actually does not -- is not an effective tool against terrorism. If you look at the fact that Rahami's family was targeted by harassment, discrimination and all that is listed in their lawsuit, it is very, very clear that it actually -- it actually has the opposite effect."

Lemon played the clip of Trump citing Israel's practice of profiling. "Do we have a choice?" Trump asked his audience. "Look what is going on. Do we really have a choice? we are trying to be so politically correct in our country, and it is only going to get worse."

Rye clarified that Trump has absolutely no idea what he's talking about. "He's talking about racial and religious litmus tests and bias in trying to profile on those particular issues. That's not what Israeli profiling does. It is a totally different type of profiling," she said.

Phillips ignored Rye's evidence and instead talked about the bomber's lawsuit while she interjected "You missed the point" several times.

"That wasn't my point. Maybe that's your point," Rye said. "But my point was that the types of harassment that Donald Trump is suggesting ... has the opposite effect. It does not combat terrorism. There is research that demonstrates that, and I know you all are not aware but those are the facts."

Trump supporter Bruce LeVell declared that there were no terrorist incidents between 9/11 and 2008, but claimed that terrorism has been overwhelming since President Obama took office with Clinton at his side. That assertion is factually inaccurate, according to Politifact, which listed several terrorist attacks in the United States and 20 attacks against Americans on foreign soil.

"Donald Trump is either saying one of two things," Bakari Sellers began. "One, it is anti-American saying we want to profile, we want to have these religion litmus tests, something we cannot even ensure will work. We know in New York we've had NYPD officers who sat down in Starbucks, in these coffee shops, in these Muslim communities and they bear no fruit. We know that."

Sellers' second point is that Trump's plan to combat ISIS is a secret which means it's probably imaginary. "As Hillary Clinton said today, we all know the secret is he has no plan."

Donations are pouring in to congressional campaigns in the wake of the Jan. 6 insurrection -- regardless of which side lawmakers were on.

Rep. Andy Kim (D-NJ) and Rep. Madison Cawthorn (R-NC) each raised around $1 million in the three months since the riot, which the North Carolina Republican helped encourage with a fiery speech beforehand supporting Donald Trump while the New Jersey Democrats helped Capitol custodians clean up the mess afterward, reported The Daily Beast.

Congressman Fortenberry did not call 911, he called police by using the duress button installed in his office that that links to Capitol Police. But he told them that he was testing the button, so they did not respond.

On Wednesday, The New York Times profiled how Republicans in state legislatures around the country, with the help of like-minded governors, are advancing legislation to criminalize protests in response to the Black Lives Matter protests against the murder of George Floyd and other high-profile incidents of police brutality.

"G.O.P. lawmakers in 34 states have introduced 81 anti-protest bills during the 2021 legislative session — more than twice as many proposals as in any other year, according to Elly Page, a senior legal adviser at the International Center for Not-for-Profit Law, which tracks legislation limiting the right to protest," reported Reid Epstein and Patricia Mazzei.