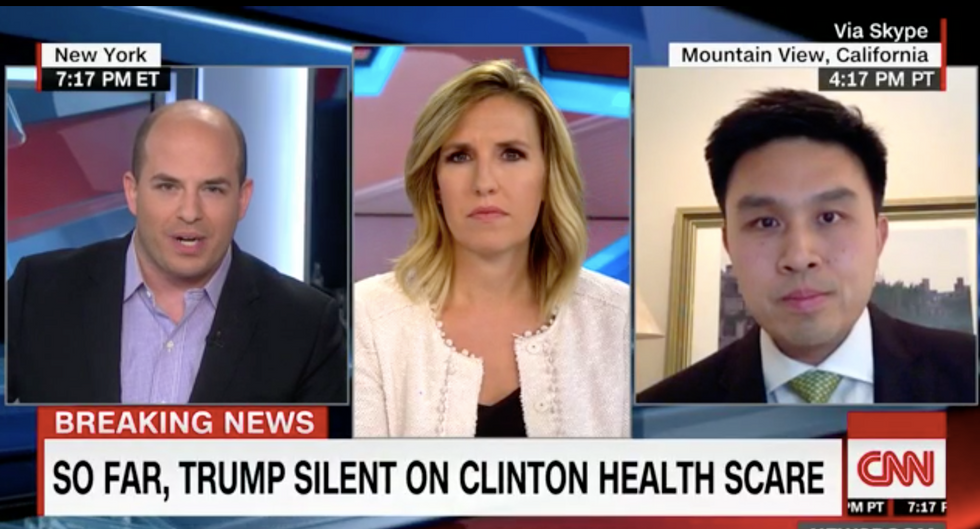 On Sunday's CNN Newsroom, Reliable Sources host and CNN senior media correspondent Brian Stelter took his fellow journalists to task over their "double standards" regarding public speculation about the health of Democratic presidential nominee Hillary Clinton and other women in the public eye.

"I think we should be honest about the subtext to a lot of this today," Stelter said to Newsroom host Poppy Harlow.

"We're talking about the first female nominee of a major political party in American history," he said. "We're talking about a campaign that's been predicated on strength: Donald Trump trying to show his strength, Hillary Clinton also trying to show her strength. If she had pneumonia and she went to the 9/11 ceremony this morning, that's a very strong, bold thing to do -- also knowing that Trump was going to be there."

"We should be honest about the double standards that women sometimes face with regards to their health," he went on, "with the idea that women are portrayed as being weaker than men, how they have to work harder to show they are as strong as men, especially in workplaces, especially in politics."

"I think we should be honest with ourselves about some of the subtext here, even as we rightly scrutinize her health today," Stelter said.

Harlow noted that Clinton is up against weeks of assertions by Trump and his followers that she "doesn't have the stamina" to be president.

When talking about #HillarysHealth, let's be honest about the gender dynamics. Stereotypes of women being "weak." https://t.co/ZrLDeVvROO
— Brian Stelter (@Brian Stelter) 1473642350.0