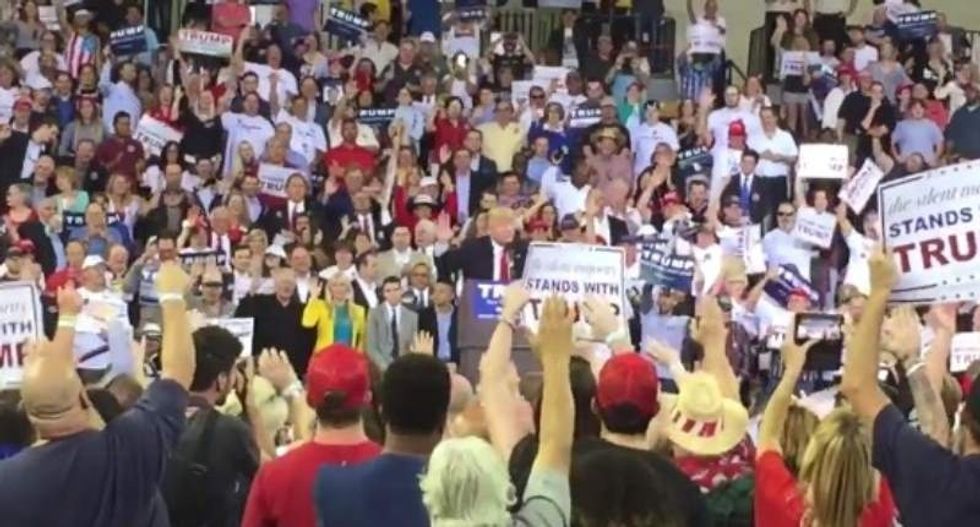 America's foremost expert on cults says that Republican presidential nominee Donald Trump's followers are eerily similar to a group of brainwashed cult adherents and that Trump himself has many of the qualities associated with cult leaders like Scientology's L. Ron Hubbard and Rev. Jim Jones -- whose followers committed suicide en masse in Guyana.

In an essay for GQ magazine, Rebecca Nelson outlined on a point-by-point basis how -- by the estimation of cult expert Rick Alan Ross -- Trump is like a cult leader.

For Ross, the realization struck during Trump's convention speech in Cleveland at the peak of the Republican National Convention. Trump told the audience that the world is a nightmare of danger and chaos and then positioned himself as the only antidote to world destruction.

Ross is the executive director of the Cult Education Institute and a lifelong Republican. However, as he listened to Trump say, "I alone can fix it" to the crowd gathered in Cleveland, something from his training as a "deprogrammer" of cult victims clicked into place.

“That kind of pronouncement is typical of many cult leaders, who say that ‘my way is the only way, I am the only one,’” Ross told Nelson. “That was a very defining moment.”

Nelson asked Ross straight out, "Is Trump a cult leader?"

Ross replied with a number of emails and voice messages mounting up similarities between Trump and notorious cult leaders like Jim Jones and David Koresh. Nelson dug deep into the material and arrived at a list of signs.

Trump's admirers, like Tania Vojvodic of Texas say that they admire the candidate's image as a "handsome, smart, successful" business leader. Everything he touches, Vojvodic said, "turns to gold." She said that his bestselling manifesto, The Art of the Deal, changed her life.

“I've lived by the Trump ideology since I was 15,” Vojvodic said. “That ideology has helped me to be successful in almost everything that I do. And I adore Mr. Trump.”

She is now a top coordinator for the campaign's volunteer network and a Trump true believer.

Many Trump supporters share the same kind of pie-eyed admiration for the former reality TV star. His policies are immaterial to them. They're drawn in by his attitude and his personal myth, much as devotees admire a cult leader.

"The single most salient feature of a cult is a person who has become, essentially, an object of worship,” explained Ross, the "defining element of the group."

“Cult leaders are most often narcissists,” said Ross. “They see themselves as the center of the known universe, and everyone revolves around them.”

On multiple occasions, Trump has taken to social media in the wake of terrible tragedies -- the Pulse massacre in Orlando, the shooting death of NBA player Dwyane Wade's cousin -- to declare that the deaths only prove how smart he is. "VOTE TRUMP!" he declared in his tweet about Wade.

His co-author on The Art of the Deal gone on the record saying that Trump is shallow, unstable and obsessed only with things that have to do with himself, his brand and his personal greatness.

Trump is "a living black hole," said Tony Schwartz. “It’s impossible to keep him focused on any topic, other than his own self-aggrandizement, for more than a few minutes.”

Former Raw Story executive editor and expert on Scientology Tony Ortega told GQ, "Scientology is a bully. If somebody speaks up against Scientology, Scientology will set private investigators on them to destroy them. It could be just a small person that decided not to take it anymore. And I think people see that in Trump.”

Sign III: What he says is always right. Even when it's not.

Trump's followers and surrogates have shown an astonishing capacity to shake off whatever previous facts they know about him and replace them with whatever today's campaign spin portrays him as. Confronting them with facts and documentation makes no difference.

Ortega said, "You just can't put that material in front of a true believer and it has any effect. And I think people are seeing the same thing with Trump. Trump creates this sort of field, this bubble, that the people inside of it are just incapable of seeing these things as those on the outside.”

Nelson wrote, "And though nearly 80 percent of the things he says are outright lies, he manages to pin the blame on the 'dishonest' and 'biased' media. Many of his followers, already distrustful of mainstream news outlets, accept whatever rationalization he provides, no matter how outlandish."

In a concluding section of the essay titled Drinking the Orange Kool-Aid, Ross told Nelson that Trump is like a cult leader, but his impact -- win or lose in November -- could be much more destructive.

"We’re not talking about a compound with a thousand people,” Ross warned. “We’re talking about a nation with over 300 million people. So the consequences of Trumpism could affect us in a way Jim Jones never did.”