‘Everyone get a grip’: Mika Brzezinski rips hysterical reaction to Clinton’s ‘deplorables’ remark 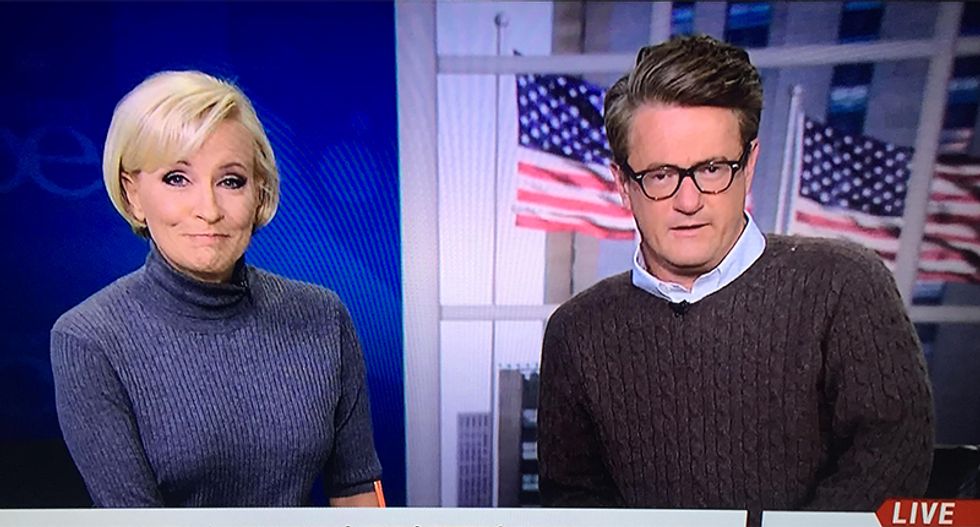 Republican presidential candidate Donald Trump responded to Hillary Clinton's statement about the "basket of deplorables," but Monday, "Morning Joe" co-host Mika Brzezinski had a hard time reading it without laughing.

"Isn't it disgraceful that Hillary Clinton makes the worst mistake of the political season and instead of owning up to this grotesque attack on American voters, she tries to turn it around with a pathetic rehash of the words and insults used in her failing campaign?" Trump said in a statement. "For the first time in a long while, her true feelings came out, showing bigotry and hatred for millions of Americans."

In her speech, Clinton called out Trump supporters that are homophobic, xenophobic and racist and who Trump has legitimized by uplifting their voices into the political narrative. Co-host Joe Scarborough read what he called a "horrifying" a Public Policy Polling survey that outlined South Carolina Trump supporters. At the time the poll was taken, 80 percent wanted a ban on Muslims entering the U.S. Just over 30 percent wanted to ban homosexuals from coming into the U.S. Over 60 percent wanted a national database of all Muslims in the country. Frighteningly, 40 percent supported shutting down all mosques and 33 percent think the religion should be illegal.

"The Trump statement is very difficult to wrap my mind around," said Eddie Glaude Jr., a religion and African-American studies professor at Princeton University. And I've been saying on this show for weeks now, what does this election say about the American electorate. And we do know this, 60 percent of Trump's supporters believe or have a negative view of Islam. Seventy-six percent of his supporters believe that we should build a wall or ban Muslims from the country. Nearly 50 percent of Trump's supporters have a negative view of African Americans. Over 40 percent think we're lazy or we're criminals."

Washington Post columnist David Ignatius agreed that there is a racist, xenophobic streak among Trump supporters, but said the sound bite will ultimately hurt Clinton. The fact that she admitted it was the wrong thing to say set her apart from Trump.

Scarborough said that he remembered those numbers because other Republicans brought them up saying, "Okay, we're going to have to come face to face with this in our party." He also wondered if Clinton knew that this statement would blow up and would give her an opportunity to get people talking about Trump's alt-right supporters again and show her taking the high road. He said that his personal position is that the positions these voters take and the beliefs that they have around race and religion are "deplorable."

"She's going to have to explain better than that one print statement what she meant. One campaign would say, 'Donald Trump has said hundreds of things just as outrageous and he's not being held accountable,'" Mark Halperin said.

Scarborough remarked that many educated people find Hillary Clinton to be deplorable and are supporting Trump even though they don't like him.

"I guess, but we've just spent 30 minutes talking about it," said Brzezinski. "While Donald Trump, literally, throughout this campaign, has a campaign that has been laced with racism, insults to Gold Star families, women and Muslim ban, and everything is let go. Then he claims that he's not P.C. and that statement is so horrified at her lack of being politically correct for one brief nanosecond. Everyone get a grip."

Here's what Trump supporters in SC backed in February during primary season https://t.co/ufmrJr16m0