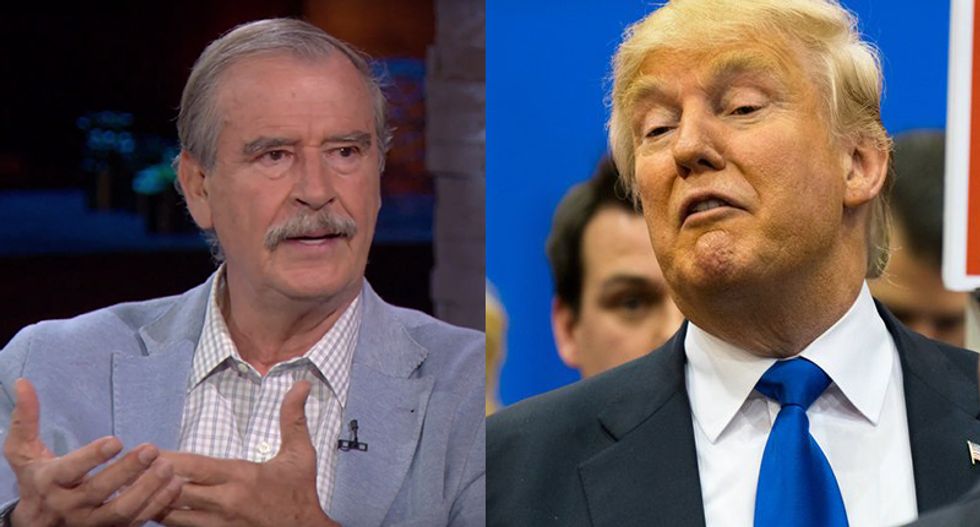 In a brutal column for the Guardian, a former president of Mexico hammered GOP presidential nominee Donald Trump over his recent visit south of the border, saying Trump briefly escaped the U.S. where his toxic lies and fabrications have "sickened Americans."

Ex-President Vicente Fox, who left office in 2006, has become one of Trump's biggest international critics -- going so far as to call him the "guy with the crazy hair," and to say of Trump's plan to build a wall between the two countries, "I’m not going to pay for that f*cking wall!"

In his scathing comments on Trump's recent visit to Mexico, Fox went further, writing: "The Republican presidential candidate arrived in my country offering diplomacy as fake as a $3 bill. He knows that he’s not welcome and was aware of his rejection, by not just Mexico but all of Latin America, and the other countries and cultures he has offended."

"It is clear that Trump loves only ratings, not credibility," he continued. "His campaign is a farce and he has been deceiving his followers since the beginning. But the biggest issue is that he handles information like a virus, which has sickened the American people."

Fox made note of Trump's cynical attempt to use his visit with current President Enrique Peña Nieto to appear presidential -- only to return to the U.S. and ramp up the anti-Mexico rhetoric that very evening.

"In my opinion, when someone who calls himself a leader turns out to be deceitful, it is a very low move. And yet he has stooped even lower, using the needs of his followers to validate himself with a speech full of intolerance, racism and fear," he wrote. "There is no way a nation could grow and prosper with no hope, values or responsibilities. History has proved that “leaderships” based on fear and ignorance are doomed to failure."

"I know that Trump is witnessing his own demise; he’s aware that every poll is against him. In the middle of all this, he chose to come to Mexico so he could stop his ship sinking, in order to return to his own country and push on with his dishonest campaign," he continued. "Well, even though I’m against walls, I’d gladly build one around Trump, to spare the world from people like him. We don’t need you."