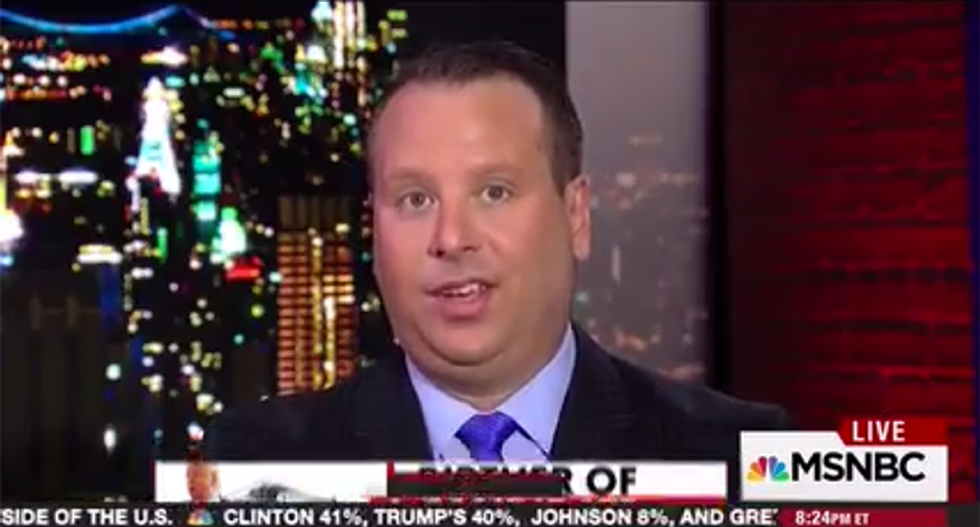 Former aide to Donald Trump Sam Nunberg didn't have a pleasant experience on "All In With Chris Hayes" on Friday night. In an embarrassing discussion with the MSNBC host along with former Ohio state senator Nina Turner, the former birther asked that Hayes emphasized that he is not a birther before the discussion began.

"Do you feel like you should apologize for the role you played in this long episode in terms of people's belief systems across the country?" Hayes asked him pointedly.

Nunberg said he didn't think he should. "It was floating around out there," he said. "We simply put a voice to it."

Hayes was having none of it. "Yeah, Sam, I'm sorry, you didn't simply put a voice to it," he began the epic takedown. "It was a strategic decision by pursuing this. It has had real effects. It has created a false belief. Sixty percent belief the president wasn't born in the United States and ergo is illegitimate to hold the office. On the other hand, as of now the majority of Americans don't support this."

"The fact that Mr. Trump did that for five whole years, the fact that some people still believe to this day that it is true that somehow the president might not be an American citizen just baffles my mind," she said. "It really feeds into some of the underlying racism that still exists in this country. It is by and far even bigger than Mr. Trump. Mr. Trump is one person. He is responsible for the leader, for the rhetoric. The poll that so many people still believe there is a chance he wasn't born in this country."

Hayes asked Nunberg if he understood now that the idea of birtherism is racist, but he wouldn't relent.

"I understand why people would consider it racist. for the polling this really frankly, the issue to be honest with you was the fact of the Muslim name," he said.

"Do you think he was a Muslim?" Hayes asked.

Nunberg said he doesn't believe Obama is a Muslim. That's when Hayes pulled out a quote from Nunberg's own Facebook page calling President Obama a "Pan-Arab Arabist Muslim." "You were saying all of the kinds of things that makes me think you actually believed this stuff, it wasn't just tactical," Hayes said. "I'm asking you about yourself. You played a role in this. I'm asking you about public statements calling him a Muslim talking about Kenyan socialism. It seems at times you expressed yourself."

Nunberg tried to explain the times were different, conversations were heated, it was the height of the Tea Party movement and he has apologized for his comments in the past. He continued, however, insisting it was Obama's middle name that made him suspect for being a secret Muslim.

"Listen, he won that primary. there is a real chance he could become the next president of the United States of America," Turner said. "We need to deal with these kinds of issues. It is not okay to accept that kind of racism no matter who it comes from. he should have denounced that kind of stuff a long time ago. It is not -- it is deplorable is what it is."

In the end, both Turner and Hayes hoped that Nunburg and Trump could accept responsibility for their campaign against Obama.