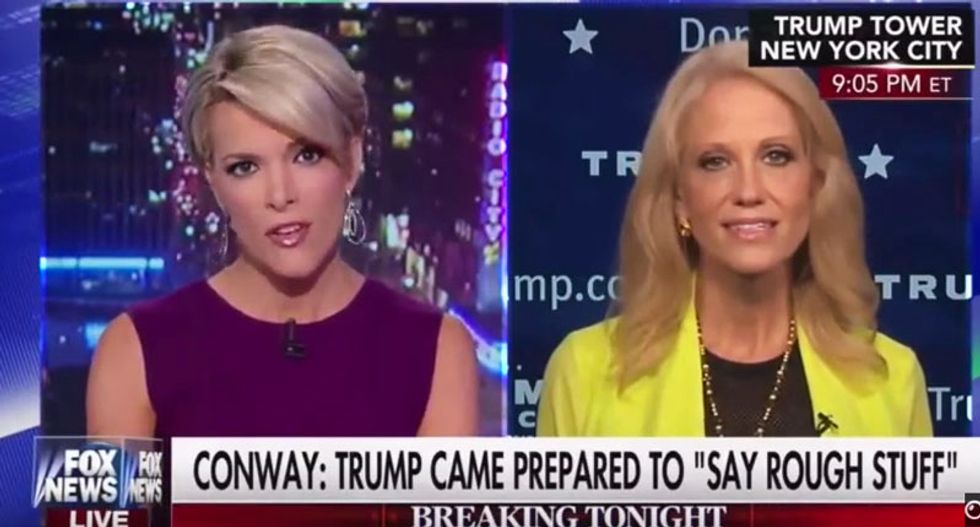 Donald Trump campaign spokeswoman Kellyanne Conway walked into a buzzsaw Wednesday night on the normally welcome Fox News network, only to have Megyn Kelly blitz her with a rundown on Trump's lifelong history of demeaning and smearing women.

As Conway attempted to reframe Monday night's debate,  the Fox News host cut her off and took issue when the Trump campaign manager complained about Clinton running "not nice" ads against  Trump.

"Kellyanne, come on," Kelly said to her as she were a child. "It's not nice? They are running for president! Of course she going to hit him with negative ads. The ads that she is running about him, when it comes to his comments about women, use his words, Kellyanne."

When Conway tried to change the subject and ask why Clinton wasn't running ads detailing her vision instead of picking on Trump, the Fox host jumped all over her.

"Because there are two facets of a campaign!" Kelly shot back. "You know that better than anybody. You hit your opponent and disqualify him or her and then you sell your own vision. I mean, she's allowed to hit him with negative ads and he should be hitting her right back,  should he not?"

The Fox host also smacked down Conway's assertion that Trump has made a "few comments about women over the years."

"You know that's not true," Kelly lectured her. "You know he has repeatedly made comments about women.  About their looks, about their size, their weight. Even in this campaign, about Carly Fiorina's face, retweeting a negative picture about Heidi Cruz's face, criticizing Hillary Clinton and her 'look.' And, Kellyanne, this is an issue for him."