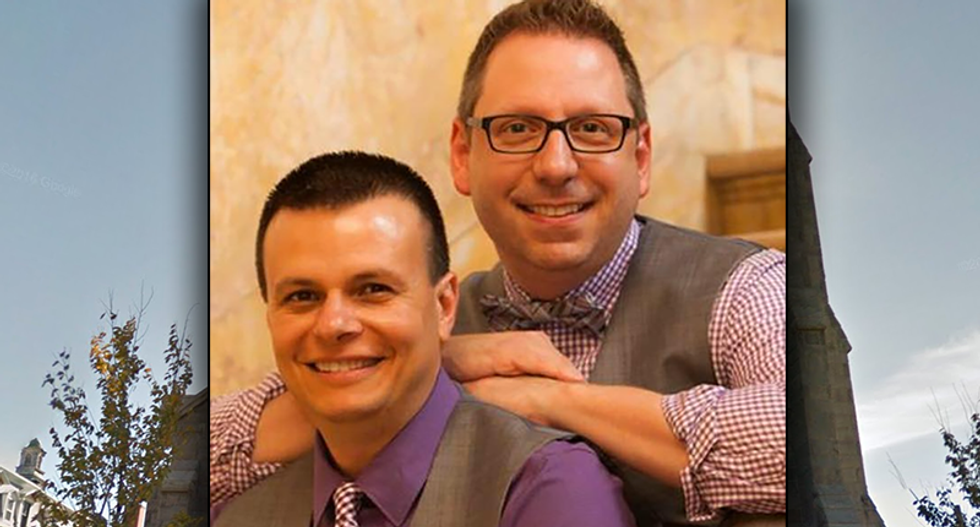 Michael Templeton married his husband in July 2015, but now it seems that the marriage cost him his job as the St. Mary's music director.

“Any person who holds a ministerial position in the Church, as an employee or a volunteer, is expected to live in a way that is fully consistent with the teachings and faith of the Church,” a spokeswoman for Bishop Thomas J. Tobin told NBC 10. “If an individual deliberately and knowingly enters into a relationship or engages in activity that contradicts the core teachings of the Church, that individual leaves the Church no choice but to respond.”

The Providence, Rhode Island man said that he was "summoned" to the church office "to be fired by the pastor and a diocesan HR staff member because of the person I love.”

(READ MORE: Lesbian pastor forced to resign by United Methodist Church after she comes out)

It left him "hurt" and "disappointed," but not only is he not working for the church anymore, he's left the parish entirely.

“It no longer feels like a place where I can feel safe and continue my spiritual journey,” Templeton said. “I do pray for the community, the pastor and the bishop, however.”

Templeton grew up in the Catholic church and has nearly 25 years of experience in music ministry. None of that mattered to Father Franceso Francese. “There were many aspects of the conversation that were bizarre, unprofessional and inappropriate,” Templeton mentioned in a Facebook post earlier this week. He wouldn't elaborate other than to say that another church employee brought something to the church's attention they had to address.

“The way that it was put was ‘the marriage to which you entered is inconsistent with the teachings of the Church,’” Templeton said. “To say that it was completely an utter shock would be a lie because I think we are all aware of what the hierarchy teaches.”

The Catechism of the Catholic Church says that anyone who acts on their homosexual identity is "contrary to the order of natural law. They close the sexual act to the gift of life.” It orders all “homosexual persons" to live a life "called to chastity."

While the church cites "natural law," the Catechism is based on scripture, not "natural law." If it was based on natural law, science would become more of a factor in the church's doctrine. Scientific research shows numerous species in nature have homosexual animals. However, the Catholic church historically has had difficulties with matters of science.

The church has suffered plummeting membership over the years as many, particularly millennials, view organized religion to be out of step with modern times. The Catholic Church in the United States, for example, dropped by 3 million members from 2007 to 2015, according to Pew. The church is also losing more members than it is gaining.

(READ MORE: Florida church: We didn’t fire lesbians for being gay — we fired them for acting like it)

Pope Francis, however, has worked to modernize the church and refocus it back on humanitarianism rather than fire and brimstone. In his post-synodal apostolic exhortation “Amoris Lætitia,” released on April 8, he wrote “in discussing the dignity and mission of the family, the Synod Fathers observed that, ‘as for proposals to place unions between homosexual persons on the same level as marriage, there are absolutely no grounds for considering homosexual unions to be in any way similar or even remotely analogous to God’s plan for marriage and family.’”

The firing is particularly sad because Templeton said he and many others found refuge at the Church of St. Mary, because of it's welcoming atmosphere for all people. He explained that people would come from all over the state to worship there instead of closer churches because of the welcoming acceptance.

“Folks come from all over Rhode Island to participate in the unique type of community St. Mary’s has been since the days of the Holy Name friars,” Templeton said. “It’s about a conscious decision to find a place that is welcoming and feels like home. They come there because they feel a sense of safety. Now, I feel a loss of safety and I’m concerned for those who don’t have a home elsewhere and are now ‘homeless’ again.”

Templeton has no intention of justifying his love for his husband to his employer or his church.

“Our relationship in itself was founded in a sense of faith and a compassionate God,” he said. “I’ve never felt out of place because I believe so strongly in a God that loves the creation that he created.”

He's not sure where he'll go yet, but he's optimistic.

“The God that I believe in created me to be fully who I am and that’s it,” he said. “My faith is stronger than it ever has been because of the love and support and outpouring of encouragement that I’ve received over the last few days. I’m not an activist or the poster man for a community of Catholics or gay people or married people. I’m not that person. But I definitely feel that God is working here. I am praying for the people of St. Mary’s. I’m praying for the pastor and the bishop because I really think that at the end of the day it’s all about our personal relationship with God and how we live consistent with the values of Jesus.”