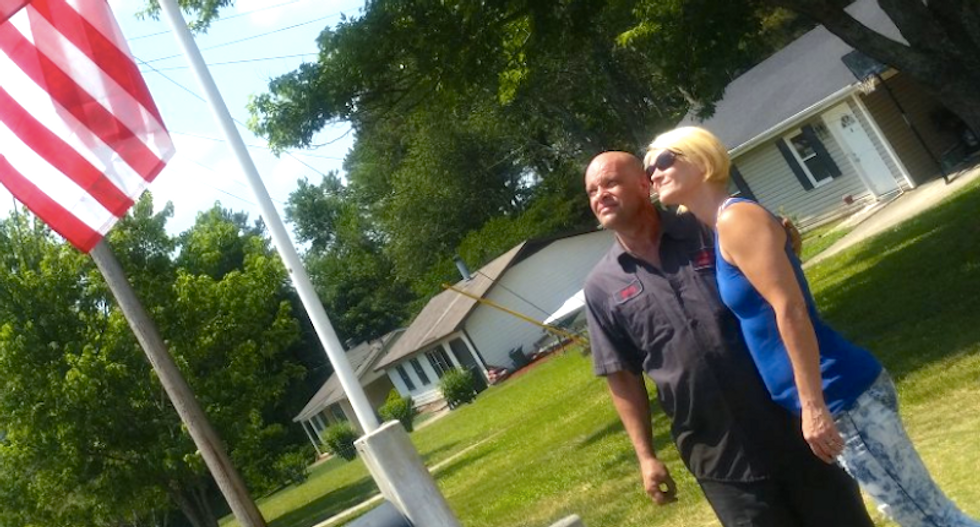 A Georgia man whose family was attacked by a Muslim woman wielding an American flag said he's preparing for civil war if Hillary Clinton wins the election.

Jimmy Arno told NPR he's concerned about the direction of the United States, and he cited the bizarre encounter last year as proof that armed revolt might be necessary to keep people like himself in charge.

"I want grandchildren, but the way this country is right now, I don't want to do that to these children," said Arno, an auto mechanic and the father of two teenage children. "Think about what it's going to be like in 18 years, if a child is born right now."

The Lawrenceburg family made local and national news last year after 30-year-old Amina Ahra took the flag from their mailbox and attacked Dami Arno and her 17-year-old daughter, and her 14-year-old son grabbed the family gun to ward off the attacker until police arrived.

Dani Arno expressed concern about a Black Lives Matter protest at the local high school, and Jimmy Arno expressed dismay at the demonstration against the display of Confederate flags.

The Arnos used to fly a Confederate flag but took it down out of courtesy after some of their daughter's friends said it made them uncomfortable, although they still hang a framed portrait of Robert E. Lee over their living room couch.

"I know that we were a whole lot further along racially eight years ago than we are today," he said.

The couple both plan to vote for Donald Trump, saying Hillary Clinton would just be a continuation of the Obama administration, and they dismissed stories about the real estate developer cheating contractors and other "ordinary people."

"Hillary wants to be elected and Donald Trump wants to be elected," Jimmy Arno said. "They're going to talk bad about everything that they can about the other candidate so that you vote for them. I discount the whole thing, because I want to know what your plan is to help the country, that's what I want to know. Donald Trump, if I understand him correctly, and I hope I do, he wants to stop the flow of illegal people in this country. Stop the flow. Well, by stopping the flow, more Americans have an opportunity to go to work because they're not losing their jobs to illegal immigrants."

Jimmy Arno told NPR he was considering joining a local militia group, because he wants to be prepared in case his darkest fears become a reality.

"Should martial law, civil war -- whatever -- break out in this country, they will uphold the Constitution and rebuild our loss," he said. "The war that's going to break out if Hillary Clinton's elected, if that happens. Your patriots are going to overthrow the government."