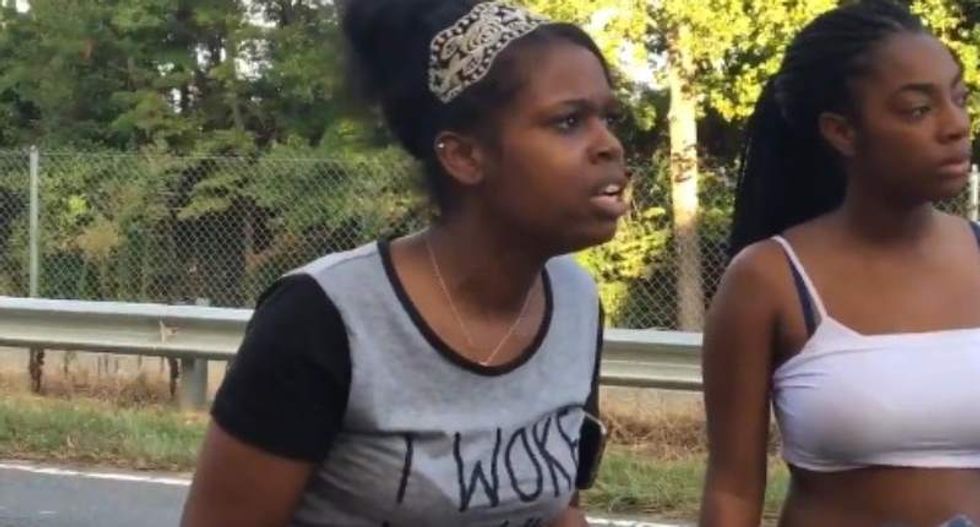 A woman identifying herself as the sister of the man shot and killed by police in Charlotte speaks to reporters on Sept. 20, 2016. (WBTV-TV)

The latest fatal shooting of a black person by police on Tuesday evening has already spurred protests, while family members accused officers of wrongfully killing him, WSOC-TV reported.

Officers shot and killed the unidentified victim inside an apartment complex in Charlotte, North Carolina, while searching for another person who had outstanding warrants.

Update: Heavy.com reported that the victim was identified as Keith Lamont Scott.

Investigators said they saw Scott get out of a car with a gun, then get back in. When officers approached his vehicle, they said, the man "posed an imminent deadly threat to the officers," prompting them to fire.

The Charlotte Observer reported that Scott died after being taken to a local hospital, and that officials would not release his name until after his family was notified.

The Root reported, however, that a woman identifying herself as the victim's daughter posted a video following the shooting, saying that he was disabled and reading a book inside his car at the time of the shooting. That video can be seen below.

WBTV-TV posted a short video of a woman identifying herself as Scott's sister also contradicting the police account of the shooting.

"He sits in the shade, reads his book, does his studies, and waits on his kid to get off the bus," the woman said. "He didn't have no gun. He wasn't messing with nobody. All they did, them 'jumpout boys,' them undercover detectives, they jumped out their truck, they said, 'Hands up he got a gun, he got a gun, pow pow pow pow.' That's it."

Her remarks can be seen below.

Here's the man's sister. She says he did not have a gun. @CMPD says he did. @WBTV_News pic.twitter.com/JwHMixy9m7

WSOC also reported that streets near the site of the shooting were being closed down as protesters began to gather, as seen here.