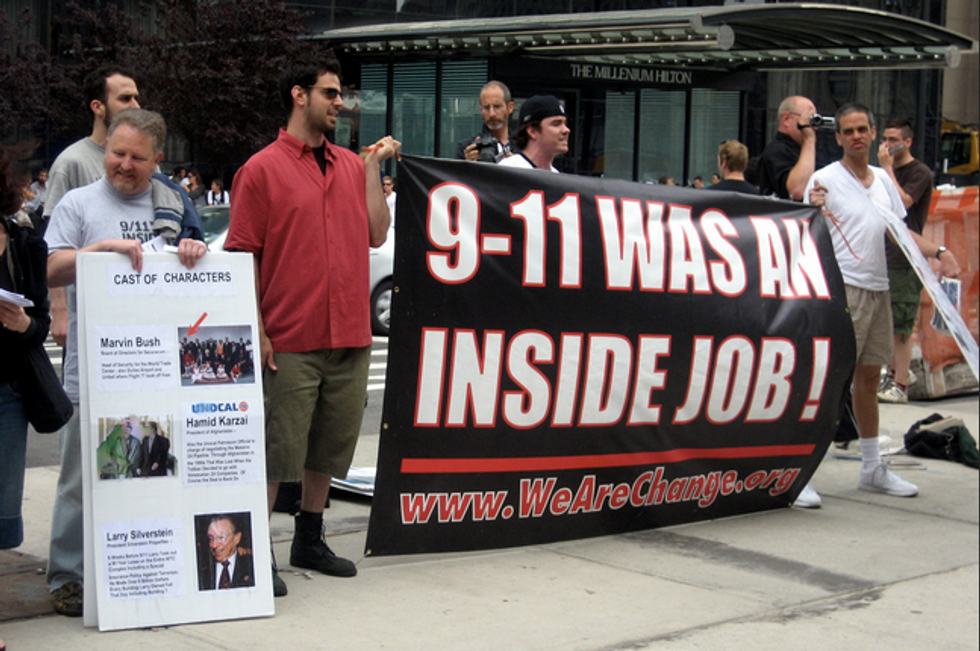 It’s getting to be that magical time of year, friends. There is the faintest taste of fall in the air. The kids are headed back to school. The sky in the morning is the most brilliant cerulean and the afternoon light is the color of wine.

So any minute now, your friend who listens to too much AM radio and bought a lot of gold over the last few years because Ron Paul told him to is going to hitch up his Dickies, spit in the dirt, set down the bong (or excessively hoppy craft beer), push his “Make America Great Again” Trump hat back on his head and say, “Ol’ Dick Cheney did 9/11. It was an inside job so they could install the Patriot Act” or something equally hare-brained and improperly verb-ed.

And it may fall to you to try and set your friend straight. So, as a public service, we thought we would list for you some of the most prominent “Truther” conspiracy theories around the dreadful terror attacks that took place 15 years ago today and some ways that you might help your friend understand and accept that sometimes bad people do bad things that don’t have anything to do with the Illuminati, the International Cabal of Powerful Jews or even space aliens.

1. President George W. Bush and Vice President Dick Cheney made 9/11 happen: This is the theory that the Bush administration and their band of neocons planned the attacks in advance, orchestrating the hideous destruction that followed as a “false flag” attack so that they might subvert the rule of law, increase surveillance on U.S. citizens and launch invasions of countries in the Middle East.

Why it’s persuasive: The Bush administration was pretty darn evil. Evidence does suggest that they were planning an invasion of Iraq well before the terror attacks.

Why you probably shouldn’t believe it: In all other respects, the Bush/Cheney administration was cartoonishly inept. The invasion of Iraq, for example, was a cock-up of global proportions. Liberty University graduates were given prime leadership positions in the Coalition Provisional Authority in spite of a complete lack of experience or training. Nobody foresaw the sacking of Baghdad’s priceless antiquities. Then, there was the shrink-wrapped $9 billion that someone thought it would be a good idea to send into a war zone — which then vanished without a trace.

Other Bush initiatives that failed include the privatization of Social Security, the failed attempt to convert all of U.S. Attorneys’ offices in the country into Karl Rove’s own farm of political mills, Guantanamo Bay, the response to Hurricane Katrina and the elevation to national prominence of a full coterie of brainless incompetents like Alberto “I don’t recall” Gonzales, Douglas “Stupidest fucking guy on the planet” Feith and Michael “Heckuva Job, Brownie” Brown.

In other the words, the Bush administration were the kind of guys who could fuck up a baked potato. To think that they could manage to engineer an operation as deadly simple but devastatingly precise as the 9/11 attacks is like thinking that a schnauzer puppy could play the complete piano sonatas of Ludwig Van Beethoven.

2. Bush and Cheney let 9/11 happen: This strains credulity a little less than the theory that the entire attack was carried out on the president and vice president’s direct orders.

Why it’s persuasive: The administration did go on to use the attacks as a lever to enact some of its foulest policy agendas. There is also the story about the infamous Bin Laden Memo that said the Saudi extremist was planning on launching attacks in the U.S., which Bush notoriously responded to by saying “You’ve covered your ass.”

Why you probably shouldn’t believe it: A lot of liberals who suffered through the eight years of Cheney and Bush would like to cast them as universally malign and capable of all forms of nefariousness. However, the real problem with the Bush years was that people in the highest offices in the land consistently let ideology blind them to the actual facts on the ground. Again and again, you can find stories of the administration wanting something to be true (WMDs in Iraq, anyone?) and simply firing people until they found someone who agreed with them.

People who subscribe to this theory have, in the words of author Robert Heinlein, “attributed conditions to villainy that simply result from stupidity.”

If you’re still in doubt about this, go take a look at those infamous seconds of President Bush sitting there goggle-eyed for seven minutes with a copy of My Pet Goat in his hands from the morning of the attacks. This is simply not the face of a man whose evil plan is working.

3. 9/11 didn’t actually happen: This is where some of the most entertaining “Truther” theories can be found. There are apparently thousands of people out there who believe that the Pentagon and the World Trade Center were hit by missiles fired from within the U.S. and that the whole spectacle was elaborately staged in order to strike terror into the nation’s heart and make us more malleable and ready to accept the One World Government.

These theories encompass the full range of delusional hooey, including the idea that the World Trade Center towers were brought down by a controlled demolition, which an astonishing number of people believe in spite of the piles of evidence to the contrary.

Why it’s persuasive: The false flag narrative is oddly comforting to some people. One would believe that it would have the inverse effect, to make people more frightened and paranoid that forces so powerful and amoral exist that they would either kill thousands of people with missiles or make it look like it happened in order to subdue the populace.

However, when we look at the real psychological motivations behind conspiracy mongering, it becomes clear that the people who believe this kind of rot take comfort in the fact that it helps them make a kind of sense out of random and confusing world. To believe that everything happens because of a huge, all-encompassing plot projects a coherent narrative on to an out-of-control world and gives the lunk-headed believer a sense of specialness and purpose. Kind of like Christianity.

Why you probably shouldn’t believe it: Missiles cloaked by holograms of airplanes? Really?

4. Mossad did it: This is the theory that the Israeli intelligence agency carried out the attacks in order to galvanize the U.S. against Muslim nations and cement the bond between the U.S. and Israel.

Why it’s persuasive: Amid the weird strain of anti-Semitism that seems to run through the conspiracy community there is simultaneously a sort of belief that the Israeli military is full of superhuman Terminator soldiers who can do anything a U.S. soldier can do, but even more ruthlessly and efficiently. Plus: Krav maga.

Why you probably shouldn’t believe it: Bush and the neocons were already so far up Israel’s ass that they could taste it when Benjamin Netanyahu changed brands of toothpaste. Why would the country even need to plan such a massive operation to get what it could obtain simply by asking nicely?

5. Some other bunch of Jews did it: That aforementioned strain of anti-Semitism, the controlled demolition theories and the false flag contingent all overlap in the belief that the World Trade Center landlord Larry Silverstein was behind the whole thing in the world’s most elaborate “Jewish lightning” arson scam.

Why it’s persuasive: Truthers cite the fact that Silverstein took out an insurance policy on the Twin Towers a year before 9/11 that had a provision against terrorist attacks. They quote his decision to pull the fire rescue teams out of Building No. 7 as evidence that he gave the order for Building 7 to be demolished.

Why you probably shouldn’t believe it: Of course Silverstein’s WTC insurance policy had a terrorist attack rider. The building was bombed by terrorists in February of 1993. The order to “pull it” on Building 7 was the order to pull out the fire rescue teams. Building 7 had a 20-story gash in it that it got when Tower 1 collapsed.

Again, this is an instance where anti-Semites attribute terrifying and sweeping powers to the International Cabal of Jews Who Run Everything. It hearkens back to the original conspiracy theory, the Protocols of the Elders of Zion, an early 20th century anti-Semitic text that was purported to be the Jews’ handbook for global domination, but was in fact written in Russia as a ploy to discredit and smear Russian Zionists.

6. Aliens did it: In 2006, Dr. Judy Wood posited that the Twin Towers, the Pentagon and Flight 93 were all “dustified” by energy weapons fired from space.

Why it’s persuasive: Because, well, the Truth is Out There.

Why you probably shouldn’t believe it: Honestly, students of the many incompetencies and clusterfucks of Bush years might find it easier to believe that space aliens carried out these attacks than the same people who brought you the “Mission Accomplished” banner and “freedom fries.” But, no, this disaster was very much made by men operating on an agenda of religious and geopolitical extremism.