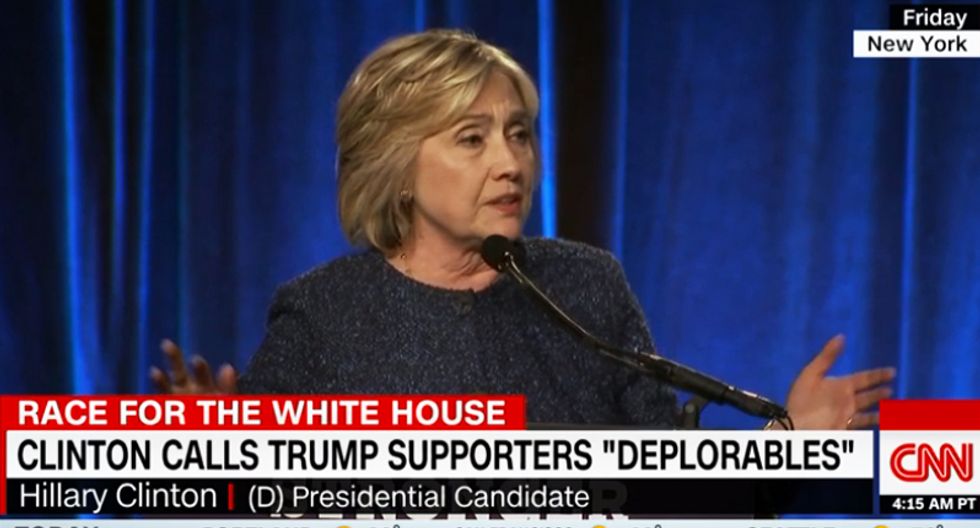 In a speech at a LGBTQ fundraiser in Manhattan Friday night, Democratic nominee Hillary Clinton grouped a portion of the supporters of GOP nominee Donald Trump into what she called a racist, xenophobic "basket of deplorables," setting off a firestorm of both criticism and support in social media.

While Clinton has used the "deplorables" line before, her addition of saying "half" set people off, with some comparing it to former GOP presidential nominee Mitt Romney's secretly-recorded talk about the "47 percent" that dealt a blow to his campaign in 2012.

In context, Clinton said: “To just be grossly generalistic, you can put half of Trump supporters into what I call the basket of deplorables. Right? Racist, sexist, homophobic, xenophobic, Islamaphobic, you name it. And unfortunately, there are people like that and he has lifted them up. He has given voice to their websites that used to only have 11,000 people, now have 11 million. He tweets and retweets offensive, hateful, mean-spirited rhetoric.”

"Now some of those folks, they are irredeemable, but they are not America but the other basket … are people who feel that government has let them down, the economy has let them down, nobody cares about them, nobody worries about what happens to their lives and their futures," she continued. "They are just desperate for change … they don't buy everything he says but he seems to hold out some hope that their lives will be different"

Needless to say, the longer quote was dismissed for the shorter and more tweetable "#basketofdeplorables," as commenters took to Twitter late Friday night to vent their displeasure, leading off with Trump campaign manager Kellyanne Conway who wrote: "One day after promising to be aspirational & uplifting, Hillary insults millions of Americans. #desperate."

Other Trump supporters were not so diplomatic, with some remembering then-candidate Barack Obama's 2008 comment about "bitter clingers."

#BasketOfDeplorables It seems being a #Deplorable is a badge of honor now. If @HillaryClinton considers me deplorable, I know I'm right.
— Asshole Jack (@Asshole Jack) 1473509916.0

The tenor of Democratic flack responses to #BasketOfDeplorables is not what you'd expect from a gaffe that is not damaging.
— Dan McLaughlin (@Dan McLaughlin) 1473479043.0

#UnhingedHillary views every American with a shred of loyalty to this land as a member of a #BasketofDeplorables.
— Comrade Stump (@Comrade Stump) 1473477887.0

Others stated that Clinton was just calling it like it is.

#BasketOfDeplorables Eagerly awaiting someone attempting to explain why being racist, bigoted, xenophobic is not deplorable :-)
— Risky Liberal (@Risky Liberal) 1473480562.0

The #BasketOfDeplorables wail free speech every time they get shouted down. Free speech includes the ability to deplore bad ideas and haters
— Steve Redmond (@Steve Redmond) 1473509951.0