Howard Dean stands by 'cocaine' tweet: 'Something funny was going on with Trump last night' 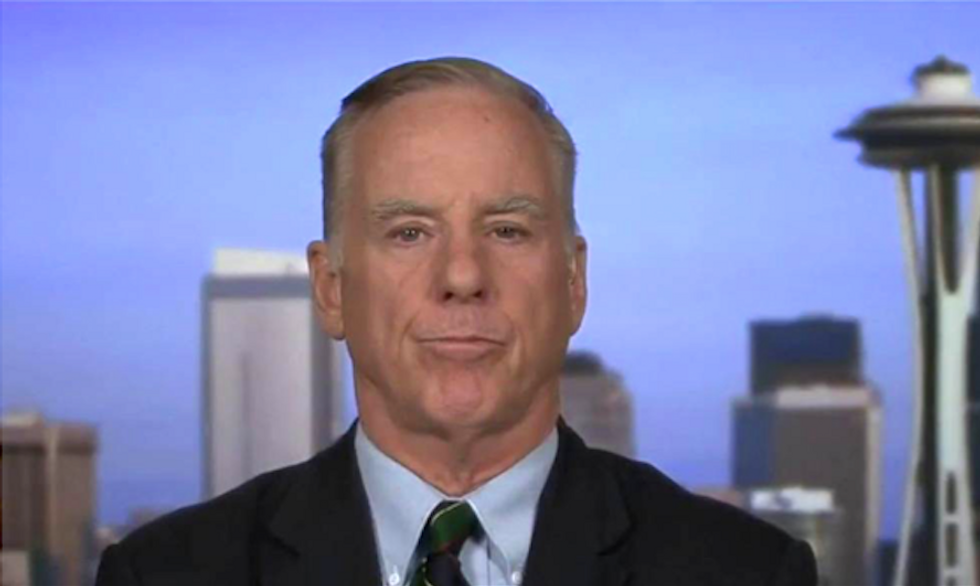 Former Vermont Gov. Howard Dean (D) appeared on MSNBC on Tuesday to defend his message on Twitter Monday night that suggested that Republican presidential nominee Donald Trump might be red-faced, talking too fast, gulping down water and sniffing due to cocaine use.

MSNBC Live anchor Kate Snow asked Dean, "Why did you go there?"

"Well, you can't make a diagnosis over the television and I would never do that, but he had some interesting...that is, actually, a signature of people who use cocaine. I'm not suggesting that Trump does, but..."

"But you are suggesting it in a tweet," said Snow.

"Well, I'm suggesting we think about it," Dean replied. "So, he sniffs during the presentation -- which is something users do -- but he also has grandiosity, which is something that also accompanies that problem. He has delusions -- I'm not talking about being crazy, but for example, when he told everybody he thinks it's smart not to pay taxes, then denied he said it after he said it in front of a hundred million people."

"It's not that he's delusionary [sic] about it, he thinks somehow he won't get caught," he said. "That is delusional."

"He couldn't keep himself together," said Dean, a former physician and ex-head of the Democratic National Committee.

"Do I think at 70 years old that he has a coke habit?" he said. "Probably not, but I think that would be something interesting to ask him and see if he ever had a problem with that."

Snow asked if Dean was going on the record as a physician saying that Donald Trump has a coke habit.

"No, I don't think he has a cocaine habit," Dean said, "but then again I don't make any diagnosis over the television."

However, he said, "I just was struck by the sniffing and his behavior, which also came together, these four symptoms, but do I think he has a cocaine habit? It's unlikely."

Snow said, "This is reminding me a lot, sir, of Rudy Giuliani a few weeks ago raising not similar but different questions about her medical history and your candidate Hillary Clinton. To which the campaign responded, 'This is inappropriate. You're raising questions about Secretary Clinton's health with absolutely no substance or proof.'"

"You don't see the parallel?" she asked.

Dean said that we've not had access to Trump's medical records -- or his tax returns -- in any meaningful way. If someone accused Clinton of using drugs last night, Clinton would say, "No I wasn't and here's my medical record that shows so."

"I don't think this is a ridiculous idea," Dean said. "Something funny was going on with Trump last night. Do I think it was cocaine? Probably not, but again -- the sniffling, the grandiosity, the delusions, the pressured speech? This guy's already proven himself to be unstable, so why is he unstable?"

When asked if it's a good thing that so many more people are talking about Trump today than Clinton, Dean said, "No, it's good. Hillary is steady as she goes. She's thoughtful and she's professional. Trump is exciting because he's like watching a shipwreck. You never know what's going to happen next. That's not what you want for the presidency, but it makes for great reality television."