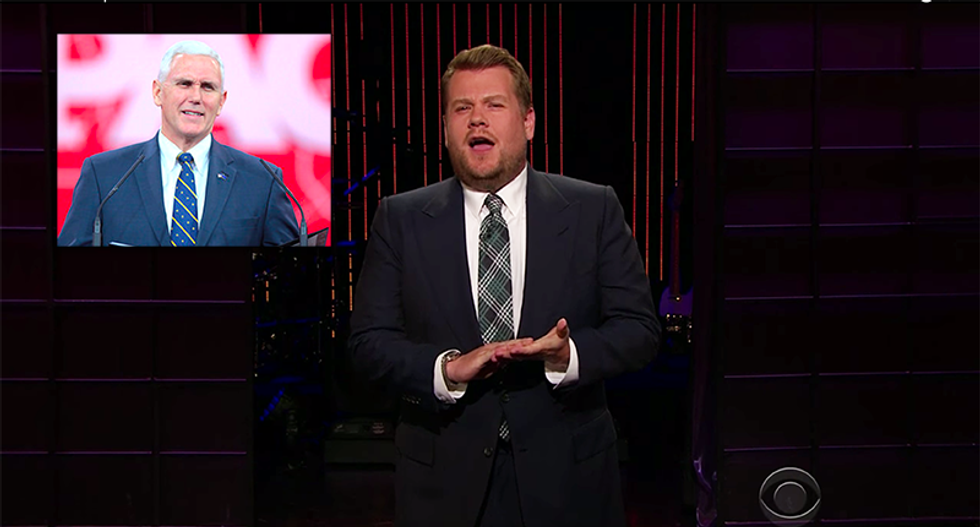 "Late Late Show" comedian James Corden hilariously mocked conservative Indiana governor and Donald Trump running mate Mike Pence on Wednesday's show. The former talk-radio host gave the most inarticulate answer in an interview with "CBS This Morning," in which Pence teased Trump's immigration speech by saying he would "articulate the plans he articulated" in the past.

Corden said that Trump going to Mexico after spending the primary attacking Mexican immigrants is outright weird. "It's like if his ultra-conservative running mate Mike Pence suddenly decided to go on a pub crawl to the bars Bottoms Up, The Rainbow Rod and The Fist of Fire."

Pence has been making the rounds on the morning shows, and when "CBS This Morning" asked him about the specifics of the Trump immigration plan he didn't have them. "There, what you will hear tonight, uh, from Donald Trump, uh, is a, is a very clear articulation of the very same principles he articulated in the course of the primary."

Confused and with his mouth hanging open, Corden wondered, "Did he just say that Trump is going to articulate the principles he articulated? I don't think Mike Pence knows what Donald Trump's plan is. They're like a couple, who separated but haven't told their friends. So they can keep up appearances. He's like, 'Donald Trump's going to Mexico? Yes, of course, I knew that.'"

He also remarked that Democratic opponent Hillary Clinton was probably more eager to build "the wall" after Trump crossed into Mexico.

For those who are anti-Trump but not yet sold on Clinton, Corden mentioned Green Party candidate Jill Stein. "If you don't know who Jill Stein is, just picture Bernie Sanders, and now picture the woman in the back of his rally selling dream catchers. That's Jill Stein."

Corden mentioned Stein's tweet over the weekend of Harambe the gorilla and urged people to a "voice for the voiceless." Stein got a backlash from fans on social media, who commented that it wasn't "even close to being in the top-15 of the most problematic things she's said, though."

"People have been saying, 'We need a third party option,' and probably after seeing Jill Stein's tweet they were thinking, 'We could probably use a fourth party option,'" Corden joked.

Ironically, Jill Stein is actually losing to Harambe the gorilla in national polls. "Harambe's not even a candidate! He's not even alive!" Corden exclaimed.