John Oliver: Trump’s scandals are way worse than Hillary’s — and voters should be 'f*cking outraged' 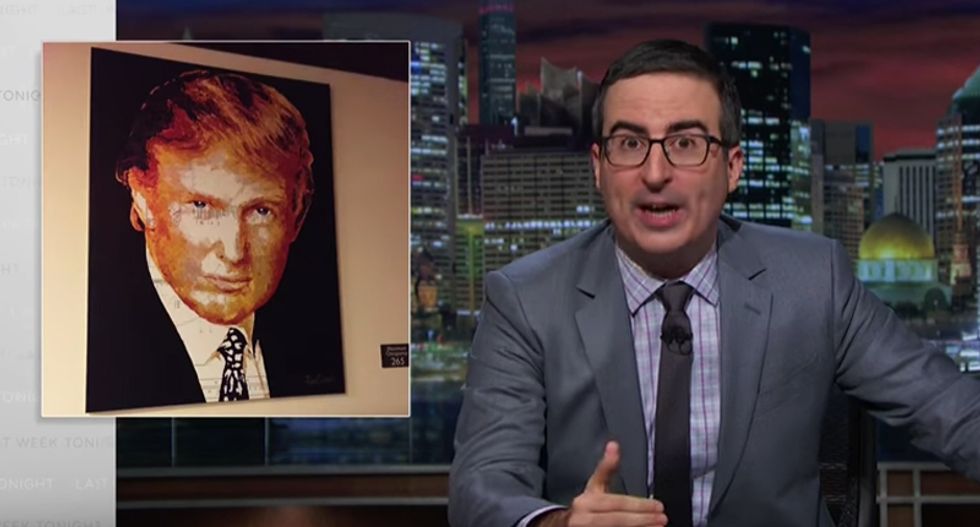 Needless to say, Trump came out "quantifiably worse" according to the HBO host.

However, Oliver explained, Clinton deserved equal scrutiny in the interest of fairness.

“I do know that even talking about her scandals will irritate some of you, given that her opponent is an unambiguously racist scarecrow stuffed with scrunched-up copies of Jugs magazine, and that’s fair,” Oliver stated. “But not being as bad as Donald Trump is a low bar to clear, and if you focus on nothing but him, you fail to vet a woman who might be president.”

“We’ve spent several frustrating weeks trolling through all the innuendo and exaggerations surrounding Hillary's email and foundation scandals, and the worst thing we can say is that they both look bad. But the harder you look, the less you actually find,” he maintained. “There’s not nothing there, but what is there is irritating rather than grossly nefarious."

"And this is where it’s instructive to compare her to her opponent: Donald Trump, America’s wealthiest hemorrhoid,” he said as he moved to the GOP nominee before adding, “He’s quantifiably worse.”

With that, Oliver covered Trump's use of his charity as a private piggy bank: paying his legal bills, making a political donation to Florida Attorney General Pam Bondi as her office investigated Trump's "bullshit" university, and buying personal items like paintings and sports souvenirs.

According to Oliver, the biggest looming scandal is the one the voters know the least about: Trump's finances.

“Bear in mind: we know nothing about Trump’s finances, and that is not good. He’s the first major party nominee since 1980 not to release his tax returns, and his justification is pathetic,” said Oliver, showing a clip of Trump saying he couldn't release his returns because he's being audited -- which the IRS has disputed saying he's free to release them at any time.

Saying he had barely "scratched the surface" Oliver summed up the preponderance of scandal that dogs the GOP presidential nominee with less than 50 days before the election.

“There is everything, from the ongoing lawsuits against that bullshit university, to the alleged use of undocumented workers when building Trump Tower, to the fact that he received an illegal $3.5 million loan from his father in the form of a purchase of chips from one of Trump’s casinos," he said.

“The point is this: the campaign has been dominated by scandals, but it is dangerous to think there is an equal number on both sides,” he said before warning, “You can be irritated by some of Hillary’s. That is understandable, but you should be f*cking outraged by Trump’s."