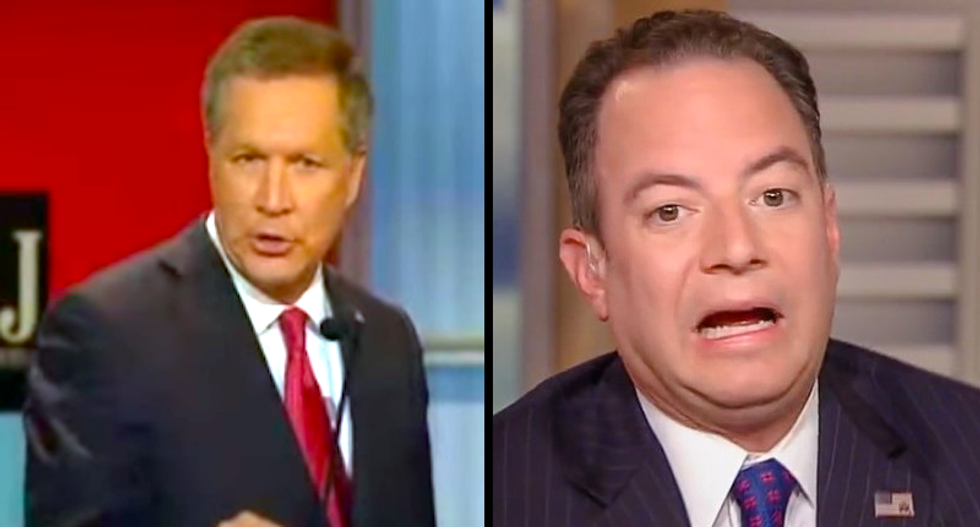 According to Politico, Priebus alluded to the fact that the party might block all future aspirations for Kasich if he doesn't play ball. Kasich's campaign issued an official statement Sunday essentially telling Priebus, "F*ck you."

"Thankfully, there are still leaders in this country who put principles before politics," Kasich advisor John Weaver said in the statement. "The idea of a greater purpose beyond oneself may be alien to political party bosses like Reince Priebus, but it is at the center of everything Governor Kasich does."

He then went on to call Priebus "a Kenosha political operative," insulting Priebus's home state of Wisconsin, and proclaiming that he should be thankful for Kasich for being a candidate with "an inclusive, conservative vision that can actually win a national election."

Weaver continued, saying that Kasich is busy this week trying to save the GOP that has collapsed under Priebus's leadership. "The Governor is traveling the nation supporting down ballot Republicans and preventing a potential national wipeout from occurring on Reince's watch," he said.

When asked how the Republican National Committee responds to the stunning smackdown, a spokesman told Politico that the RNC is focused on winning the White House as well as other federal races, but didn't comment on the feud.

An anonymous GOP strategist claims Kasich will anger the GOP for reneging on his promise to support the GOP nominee, regardless of who that happens to be.

"Politicians who sign their names on pledges and agreements then not honor them, are only doing harm to themselves, as they do nothing but illustrate to prospective voters their word means nothing," the strategist said.

Kasich has refused to support Trump, going so far as to tell "Meet the Press" in a Sunday interview "it's very, very likely I will not" vote for Trump.

Kasich also refused to support Trump during the party's nominating convention that took place in his own state.

In a Sunday interview on "Face the Nation," Priebus threatened Kasich while claiming it wasn't a threat, saying, "Those people need to get on board. And if they're thinking they're going to run again someday, I think that we're going to evaluate the process — of the nomination process and I don't think it's going to be that easy for them."

"In order to be on the ballot in South Carolina, you actually have to pledge your support to the nominee, no matter who that person is. So what's the penalty for that? It's not a threat, but that's just the question that we have a process in place," Priebus continued.

Priebus then attempted to blame the lack of unity on Trump's lackluster support among Republicans, before admitting, "We need to do a couple more percentage points better and we're doing that as we move forward," he said.

According to New York Times reporter Alex Burns, Trump escalated his attacks on Kasich by calling him a loser.

Trump escalates against Ohio's governor, ridiculing Kasich >> "He got beaten as badly as anybody could get beaten"
— Alex Burns (@Alex Burns) 1474284112.0