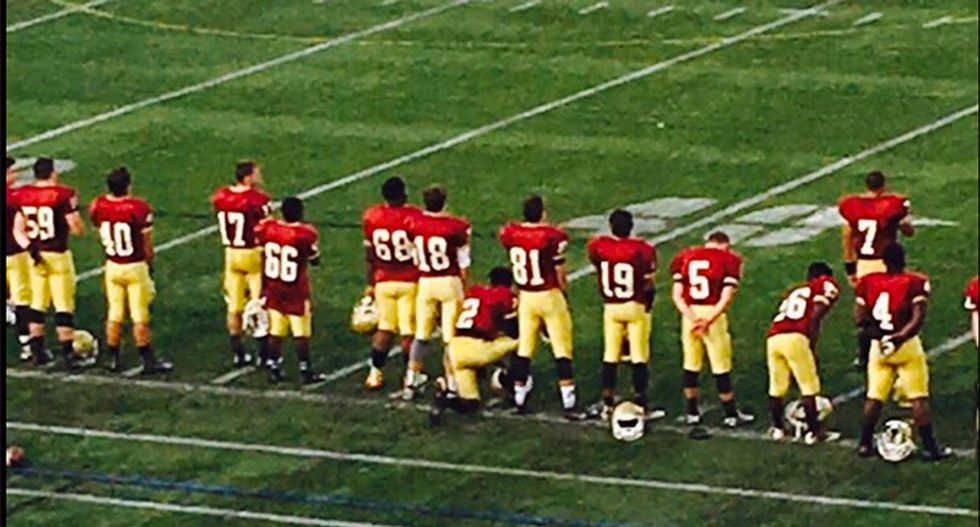 While NFL football players are kneeling or sitting out the opening of games during the national anthem, the protest spread this week to one high school student in Worcester, Massachusetts.

Mike Oppong, who attends Doherty Memorial High School, said that he is standing against injustice that happens to African-Americans every day. He said that it isn't just about cops shooting black people. "We are disrespected and mistreated everywhere we go on a daily basis because of our skin color and I'm sick of it," he told reporters over Twitter direct message.

Like Colin Kaepernick, Oppong plans to continue his protest throughout the season. "My teammates have been supporting me the whole way," he said.

I just want to thank all of you guys for the support you all gave me throughout this whole situation and by God's grace Justice was served!
— Michael Oppong (@Michael Oppong) 1473688537.0

Oppong later announced, "My coach just called me a couple minutes ago telling me that the coaches and principals decided that I should be suspended for one game."

Activists in support of Oppong's protest are encouraging supporters to protest the suspension by contacting principal Sally Maloney at Doherty Memorial High School.

Oppong later tweeted that his suspension had been lifted.

Sarah Wunsch, deputy legal director of the ACLU in Massachusetts told MassLive that state law prohibits students from being punished for peacefully expressing themselves.

"In our view, they violated his rights," Wunsch said. "I would suggest that other members of the team would join them. It's really important that he's not alone in this."