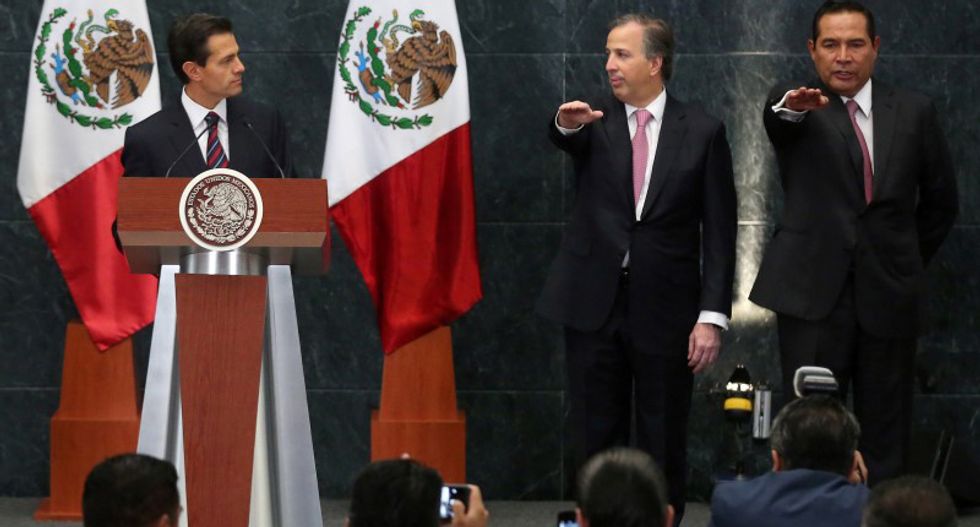 Mexico's new finance minister on Thursday delivered a stern reproach to Donald Trump, saying the only thing he agreed on with the U.S. Republican presidential candidate was that his predecessor in the ministry was an excellent public servant.

The comments follow the resignation of Luis Videgaray as finance minister on Wednesday after he came under fire for Trump's visit to Mexico City last week, which Mexican diplomats said he was instrumental in arranging.

(RELATED: Mexico threatens to cancel treaty that ceded Texas and California to US if Trump gets elected)

Trump has infuriated Mexicans with a series of broadsides against the United States' southern neighbor, and his hastily arranged visit to meet President Enrique Pena Nieto a week ago sparked heavy criticism of the government.

Presenting the government's 2017 budget plan just a day after his appointment, the new finance minister, Jose Antonio Meade, did not mince his words when he was asked about recent comments by Trump on Videgaray at a news conference.

"I'd like to point out that the only thing, absolutely the only thing I agree on with candidate Trump is that Luis Videgaray is an exceptional public servant," Meade said.

The outspoken American real estate mogul has vowed to make Mexico pay for a border wall to keep out illegal immigrants, as well as threatening to carry out mass deportations and tear up trade treaties crucial to its economy.

Late on Wednesday, Trump commented on Videgaray's resignation on NBC television when he was asked if the United States could take a chance with him as commander-in-chief.

"Well, I think absolutely," he said. "I think if you saw what happened in Mexico the other day...I let them know where the United States stands. I mean, we've been badly hurt by Mexico...And if you look at what happened, look at the aftermath today where the people that arranged the trip in Mexico have been forced out of government. That's how well we did."

In an apparent u-turn on those remarks, on Thursday Trump tweeted his appreciation for Videgaray, who was widely seen as Pena Nieto's closest advisor in the Cabinet.

Meade, a friend of Videgaray's, was foreign minister when Trump launched his presidential bid in June 2015. He later moved to another ministry before his appointment on Wednesday as finance minister, a job he also held in the previous government.