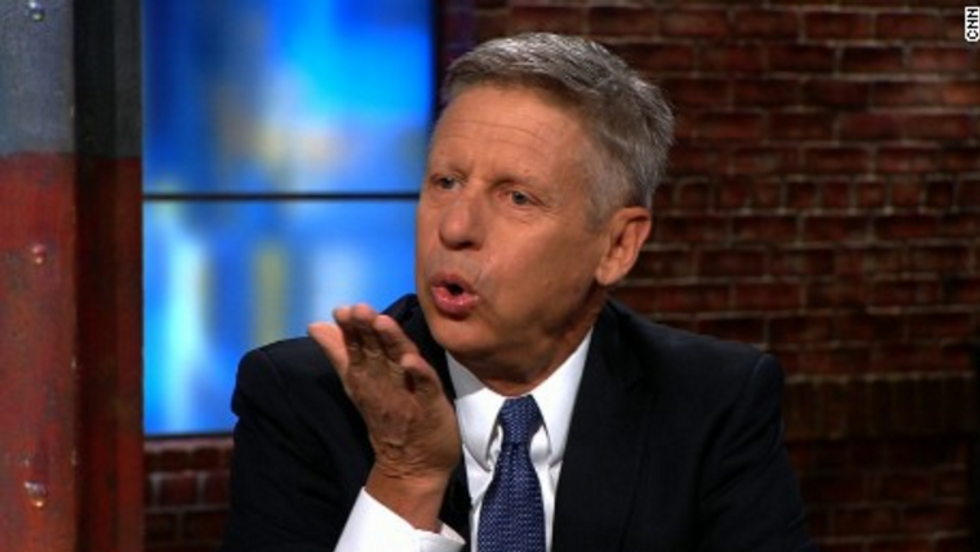 Paul Krugman asks in his Monday's column how many of Libertarian candidate Gary Johnson's young supporters have actually read Johnson's platform. Right off the bat he clarifies that it only makes sense to cast a vote for him if you believe "it makes no difference at all whether Hillary Clinton or Donald Trump moves into the White House — because one of them will." And, "Second, you have to believe that America will be better off in the long run if we eliminate environmental regulation, abolish the income tax, do away with public schools, and dismantle Social Security and Medicare — which is what the Libertarian platform calls for."

So do the 29 percent of voters between 18 and 34 who, according to a recent Quinnipiac poll, say they support either Johnson or Green Party candidate Jill Stein believe those things? Highly doubtful.

Krugman is pretty much begging these voters to vote as if it matters, which he clearly believes it does.

It calls for abolition of the income tax and the privatization of almost everything the government does, including education. “We would restore authority to parents to determine the education of their children, without interference from government.” And if parents don’t want their children educated, or want them indoctrinated in a cult, or put them to work in a sweatshop instead of learning to read? Not our problem.

What really struck me, however, was what the platform says about the environment. It opposes any kind of regulation; instead, it argues that we can rely on the courts. Is a giant corporation poisoning the air you breathe or the water you drink? Just sue: “Where damages can be proven and quantified in a court of law, restitution to the injured parties must be required.” Ordinary citizens against teams of high-priced corporate lawyers — what could go wrong?

Meanwhile, there is a world of difference between the two people who actually have a shot of becoming president. There is Trump's incohererency, and on economic policy his "brain trust," which is "composed of hard-line, right-wing supply-siders even Republican economists have called "charlatans and cranks" — for whom low taxes on the rich are the overwhelming priority," according to Krugman.

And there is Clinton's historically progressive policy positions, some of which come out of the Bernie Sanders playbook. Newsflash from Krugman: "What some are now calling the 'new liberal economics' has sunk deep roots in the Democratic Party, and dominates the ranks of Mrs. Clinton’s advisers."

Young people eager to make a statement with their third-party vote should note, according to Krugman, that "nobody cares" about their statement. History has already shown that with other third-party candidates. What is at stake in this election is too serious for an unserious vote.