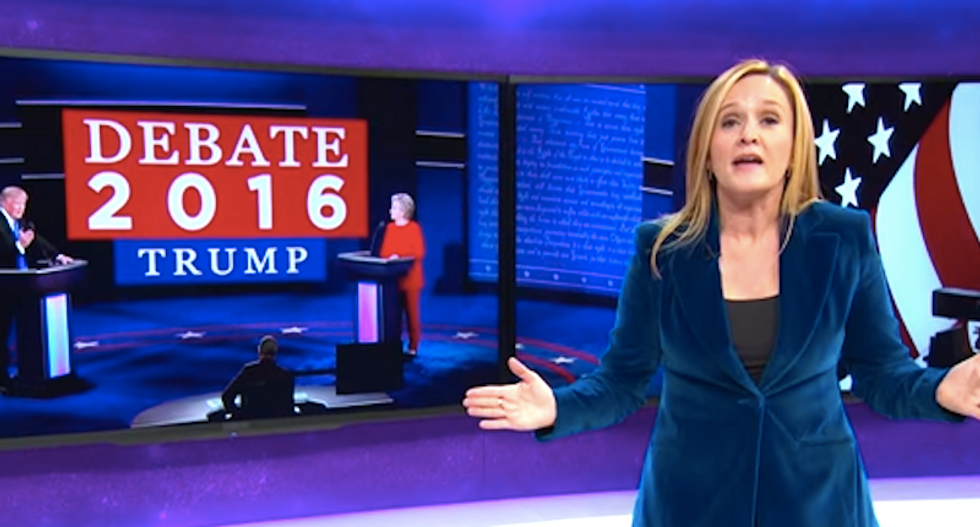 Samantha Bee rescheduled her "Full Frontal" program to Wednesday night to avoid conflicting with the first presidential debate -- which drew an astounding 80 million viewers despite going head-to-head with the NFL's "Monday Night Football."

"For once, concussion ball was not as compelling as watching American democracy play Russian roulette," Bee said.

She said things started off okay, because campaign manager Kellyanne Conway's control collar worked for about 20 minutes to keep Donald Trump in check -- but things fell apart when the Republican candidate "attempted to wedge his monstrous apricot bulk into the narrow spaces between (Hillary) Clinton's facts."

Clinton reminded voters that Trump believes climate change is a hoax perpetrated by the Chinese -- which he flatly denied, despite the evidence found on his Twitter account.

"One, yes you do say that, and two, shush -- the lady's got the talking stick," Bee said. "Don't insult her until you're asked to insult her."

Trump explained his previous criticism that Clinton didn't have a "presidential look," which he insisted -- repeatedly and ostentatiously -- meant she lacked "stamina."

She also mocked Trump's claim that Clinton had been fighting Islamic State militants her entire life, although the terrorist group did not even exist until 2006.

"In the 90-minute lull between police shootings of black men, the candidates had a chance to reach out to African-Americans," Bee said.

Clinton gave a detailed proposal for criminal justice reform, while Trump swiped Richard Nixon's 1968 campaign slogan -- "law and order" -- which he repeated over and over during his rambling remarks, before warning that Americans would get shot walking down the street in many black neighborhoods.

"What the f*ck would you know about walking down the street?" Bee said, flashing an image of Trump's limousine onscreen. "Second, if you think a tired, old, racist dog whistle is how you heal the divide, you've got a lot to learn about listening to people of color."