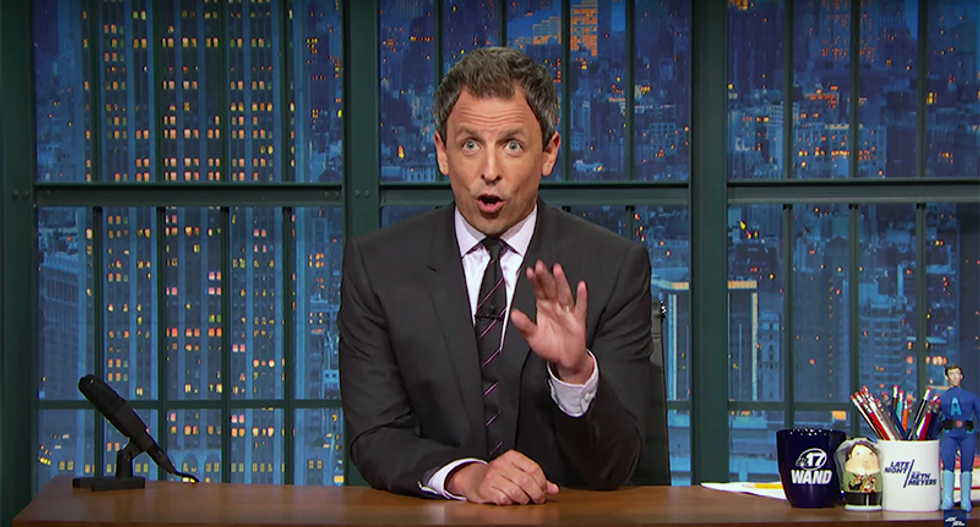 The media is never fair when it comes to Republican presidential candidate Donald Trump and his Democratic rival Hillary Clinton. Sexism and higher expectations aside, the recent dust-up over Clinton's "basket of deplorables" statement revealed that Donald Trump can lie and insult anyone, and cable news tends to look away.

While it might be unfair, "Late Night" host Seth Meyers has a reality check for Clinton and her supporters. "Don't bring a Vera Wang shrimp fork to a knife fight. Yeah, Donald Trump called Mexicans rapists and has called you and your supporters a hundred different names, but there is a double standard at play in this election," he cautioned. "Sure, it's patently unfair, but you can't play tit-for-tat with Trump because the media is only going to talk about your tats and completely ignore his tits."

Meyers also took issue with the insult itself, calling the "basket of deplorables" something like the "bargain bin at Neiman Marcus," he joked. "What's the matter? You couldn't come up with an insult that made you sound like a richer, whiter lady?" He encouraged Clinton that if she's going to get into the gutter with Trump, she's going to need to do better than that.

This election has a kind of "older sister, younger brother dynamic," Meyers pondered. "Basically Trump is Ferris Bueller and you're his sister Jeanie. Trump can cut school, dance on a parade float, claim to be the sausage king of Chicago, but you, Hillary, you should know better! You were Secretary of State while he was televising a Gary Busey job interview. The rules are different for you!"

Meyers concluded that if life was fair Trump would be the second salesman at a carpet store in Queens.

He also told Clinton that she must take a moment to relax. "You have to rest! These are the kinds of things you say when you have pneumonia and give a speech. I once gave an oral report in high school after taking Sudafed and said if Ahab wanted to kill a big white dick he should have chucked a harpoon at Mr. Fenton, am I right? And I wasn't wrong — but I shouldn't have said it."