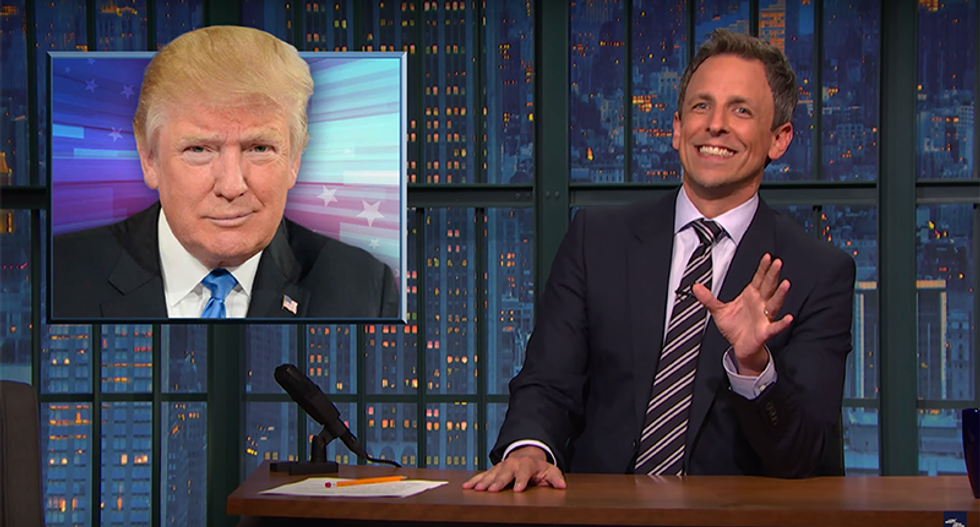 From the New Republic to the Washington Post, editorials are beginning to write about the Donald Trump scandals that cable news seems to be ignoring. Perhaps, that's why "Late Night" host Seth Meyers did his own comparison of the candidates.

Questions have plagued the Hillary Clinton for the use of a private email server while serving as Secretary of State. Last week, the FBI released notes from the interview with Clinton revealing that she didn't know that the letter "C," when embedded somewhere in the email meant "confidential." It seems Trump didn't know it meant that either since he tweeted, "Lyin' Hillary told the FBI that she did not know the 'C' markings on documents stood for CLASSIFIED. How can this be happening?"

"Ya know," Meyers began his hilarious smackdown. "It's so great that when Trump is wrong he does us the favor of highlighting it by putting it in all caps. It's only a matter of time before he tweets, 'Our best president was our first president ABRAHAM LINCOLN.'"

Meyers concluded that only Trump could take an issue that has dogged Clinton in the polls and "turn it into a bizarre conspiracy theory fever dream." At a rally in North Carolina Tuesday, Trump implied that the "IT aide who pleaded the 5th and who is still very much alive may actually be dead." After playing the clip of Trump asking where the IT guy went, Meyers explained that pleading the 5th doesn't mean someone then dies. "It just means, he's the IT guy," he said.

Meyers moved on to the Clinton Foundation scandal and explained that there is no evidence that the State Department ever did any special favors for donors to the foundation. The same can't be said for the Trump Foundation, however.

"One reason you probably heard less about it is because it's not exactly clear what the Trump Foundation does," Meyers said. "The Clinton Foundation provides life-saving care to AIDS patients while the Trump Foundation once gave $250 to the Special Olympics and $100 to the March of Dimes. Did he think the name meant you could only give dimes?"

This week, it was revealed that the Trump Foundation was implicated in a legitimate scandal involving a $25,000 donation to Attorney General Pam Bondi, whose office was investigating Trump University for fraud at the time. Many have speculated that Trump was giving her the money in hopes she would look the other way. Four days later, the investigation was dropped.

"The irony is that Trump University offers a class called 'Looking the Other Way,'" Meyers joked.

Trump swore he never even spoke to Bondi and that the whole incident is merely a coincidence. However, it wasn't just the Trump Foundation that donated to Bondi while she was considering fraud charges. Trump and his daughter Ivanka, separately gave $500 to Bondi's re-election campaign.

The problem Trump has is that he spent the entire primary season openly bragging about buying influence with both Democrats and Republicans.

"Think about how sad that is," Meyers said about giving Clinton a donation and her attending his wedding later. "He is bragging that he had to pay people to come to his wedding. And I'm pretty sure Hillary wasn't the only one who was there for the money," Meyers said, flashing a photo of Melania Trump on the screen.

"And yet, after months of accusing Hillary of pay-to-play at the Clinton Foundation and calling for her to be in prison Trump supporters including former federal prosecutors Chris Christie (R-NJ) and Rudy Giuliani are brushing off these allegations against Trump as completely innocuous. I guess they'll just defend anything Trump does, or as Trump himself put it," Meyers said, before playing a clip of Trump saying, "they kiss my ass."

Watch the full smackdown below:

U.S. Magistrate Judge Zia M. Faruqui released an accused insurrectionist to go on vacation after she spent and night in jail and then verbally agreed to the court's conditions.